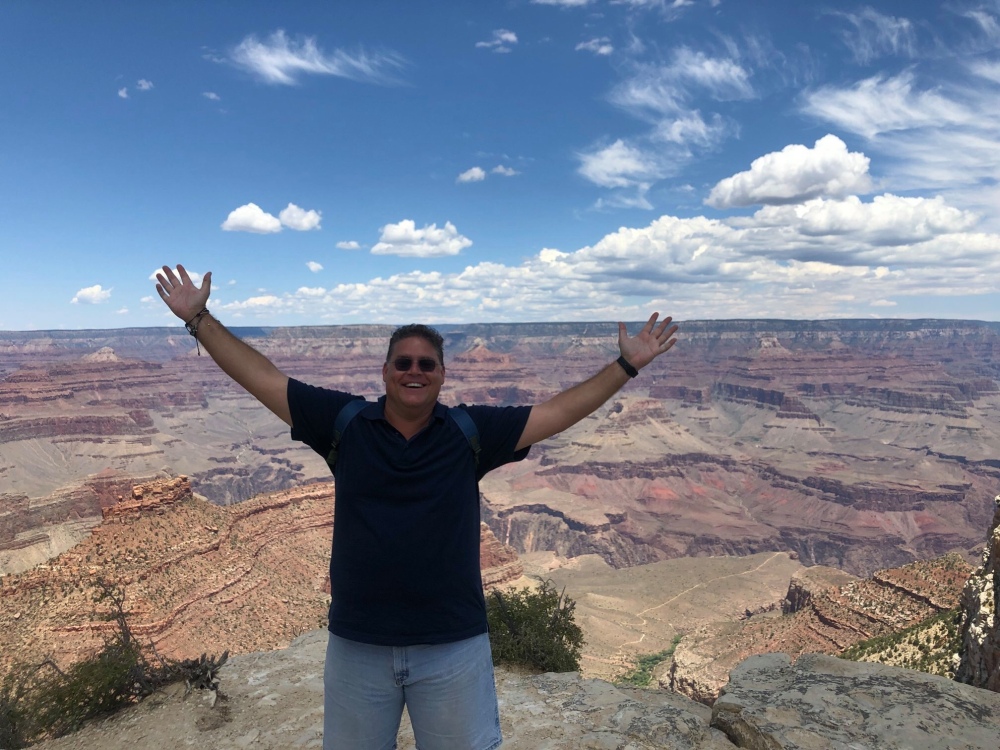 And just like that, our trip to the Grand Canyon was over. But, our vacation is far from over! This morning, we got up, placed our luggage by the door and walked up to the El Tovar hotel for breakfast before meeting up on the bus for our drive to Utah, and my first look at Monument Valley!

This morning, the food was simply amazing. I had blackened trout, with scrambled eggs and breakfast potatoes…I don’t think I’ve ever had trout for breakfast before, and it was delicious. In fact, I don’t think I even got a picture of my plate this morning! <shock> <gasp> I was either too hungry or too sleepy! Lol 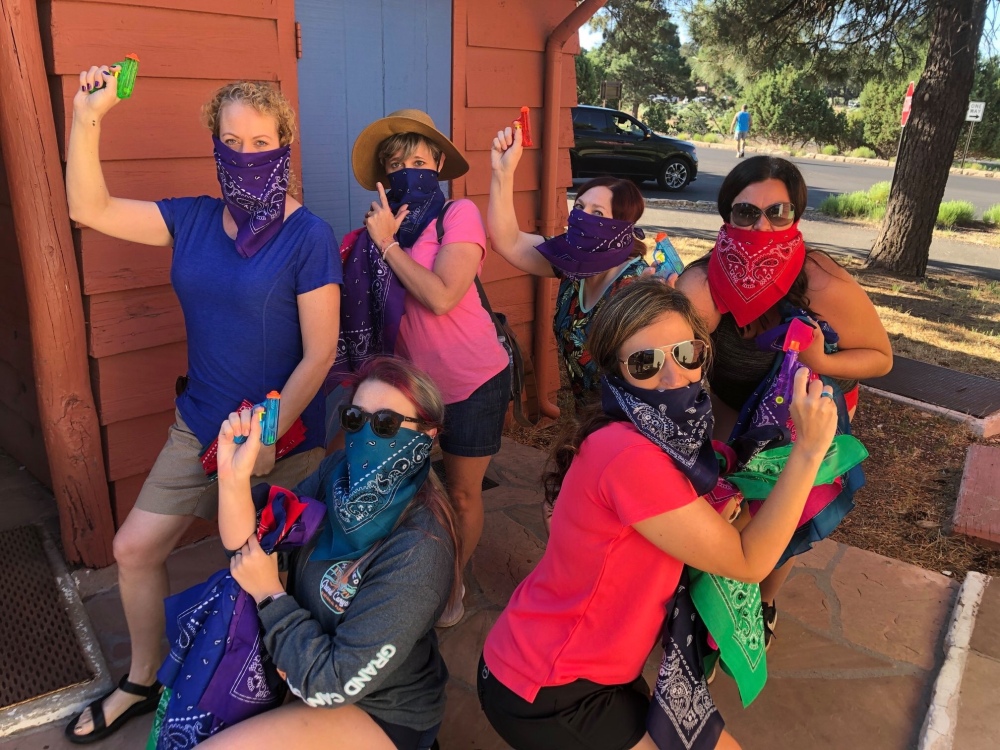 Diana had taken some of our group away and given them squirt guns and a stash of bandanas to pass out in preparation for our tour through Monument Valley after lunch. What a fun way to start a trip on a bus!

On our way out of the Grand Canyon National Park, the views from the bus were still pretty amazing! 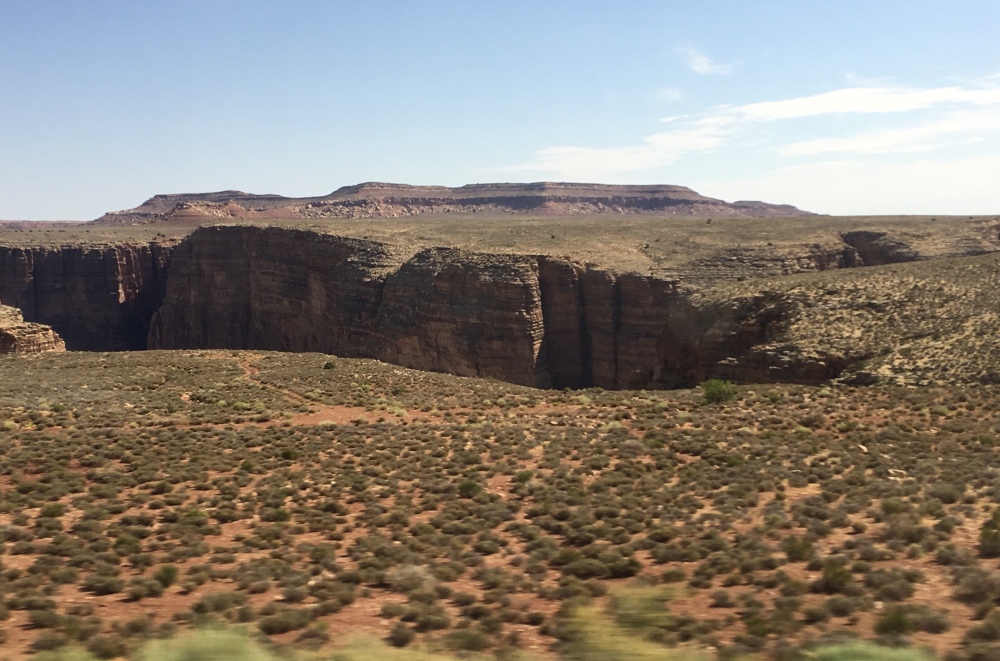 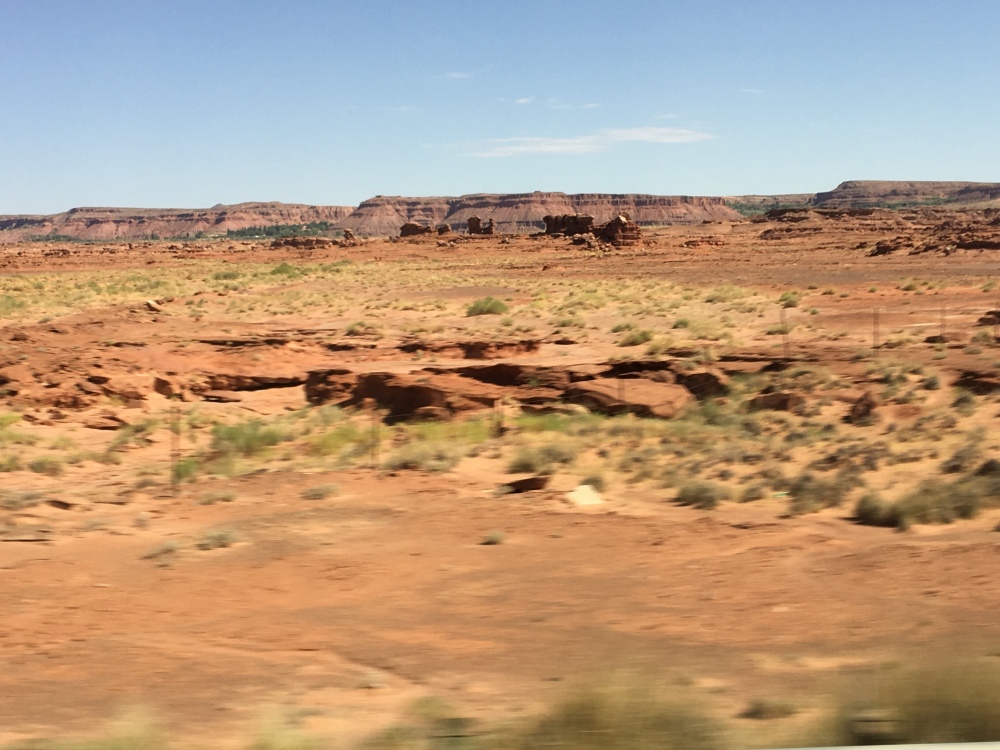 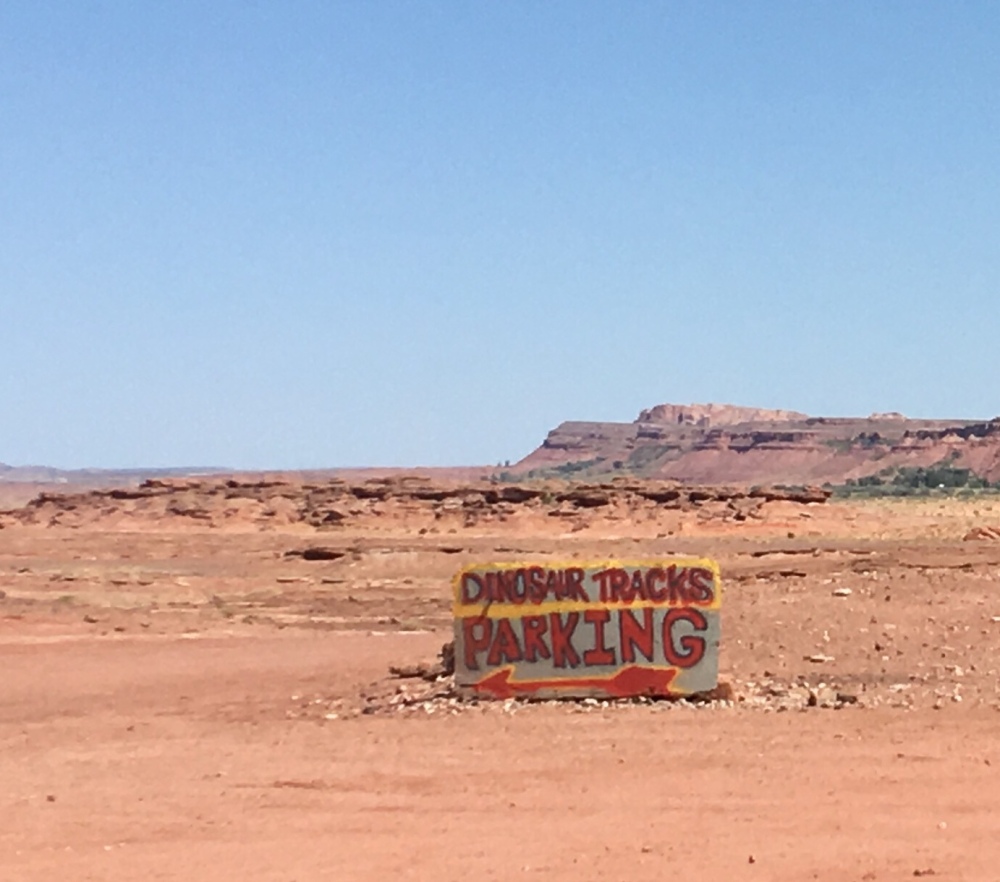 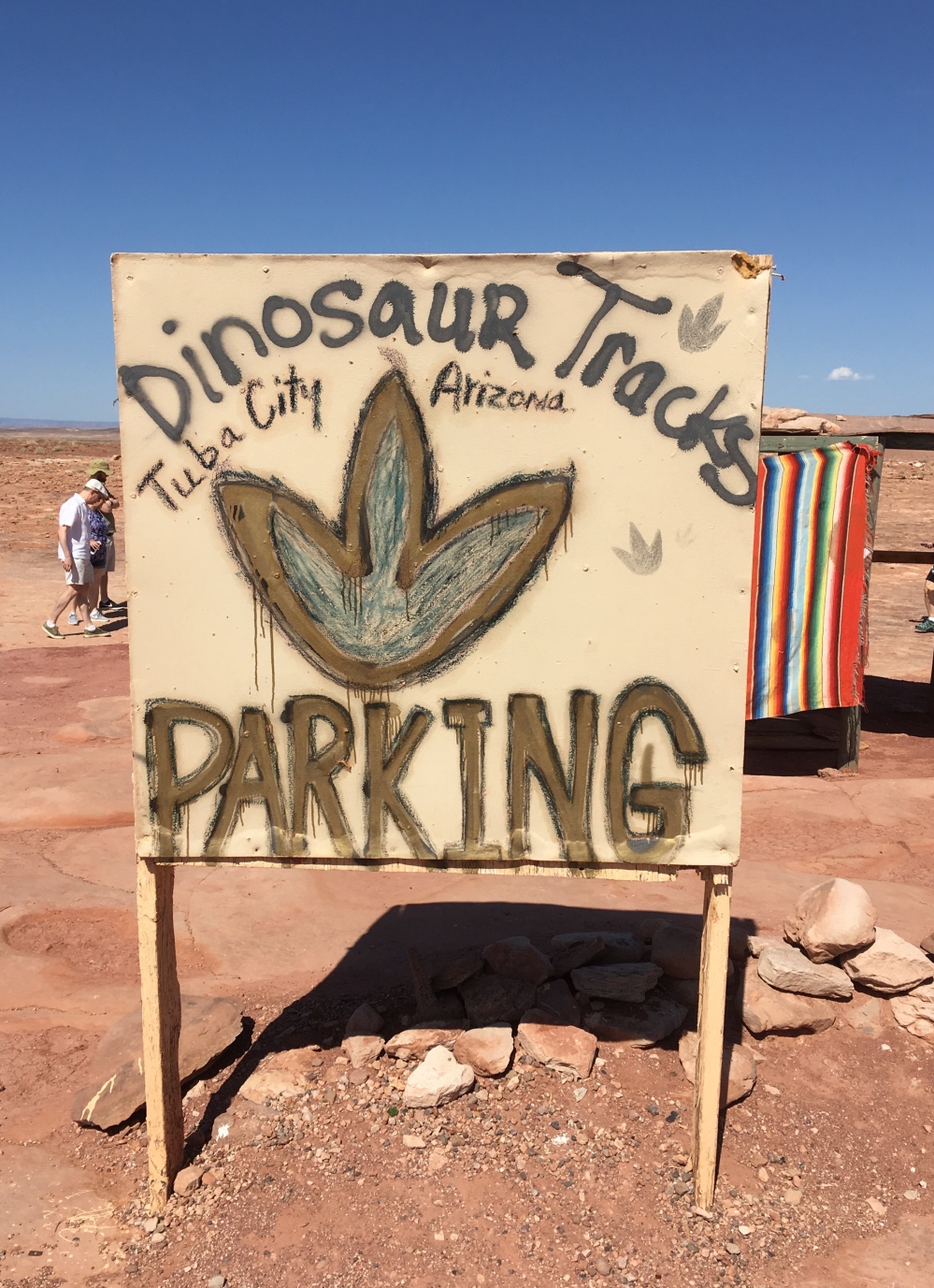 No Disappointments on this trip!  It’s time for another stop that wasn’t published in our itinerary! I love these “surprise” visits! Doug told us that the Native Americans here are trying to create a better experience here. For now, Native people who work here make all of their money by showing tourists around and work solely on tips. Doug said that also, depending on the guide we get, the information may or may not be accurate. We were here about 20-25 minutes and I can honestly say it was fascinating. Having never seen anything about dinosaurs except in a museum, at Disney, or at Jurassic Park (Island of Adventure, Universal Studios Orlando) seeing actual fossils in the desert was a complete and utter first for me!

The Guides here poured water in the footprints so that we could see them better!

We saw fossilized footprints, fossils of dinosaur skulls, bones, and even the wing of a pterodactyl! My inner second-grade self completely geeked out this morning!!

Here’s some of our group pretending to be pterodactyls in front of the fossilized wing of one of the great creatures. 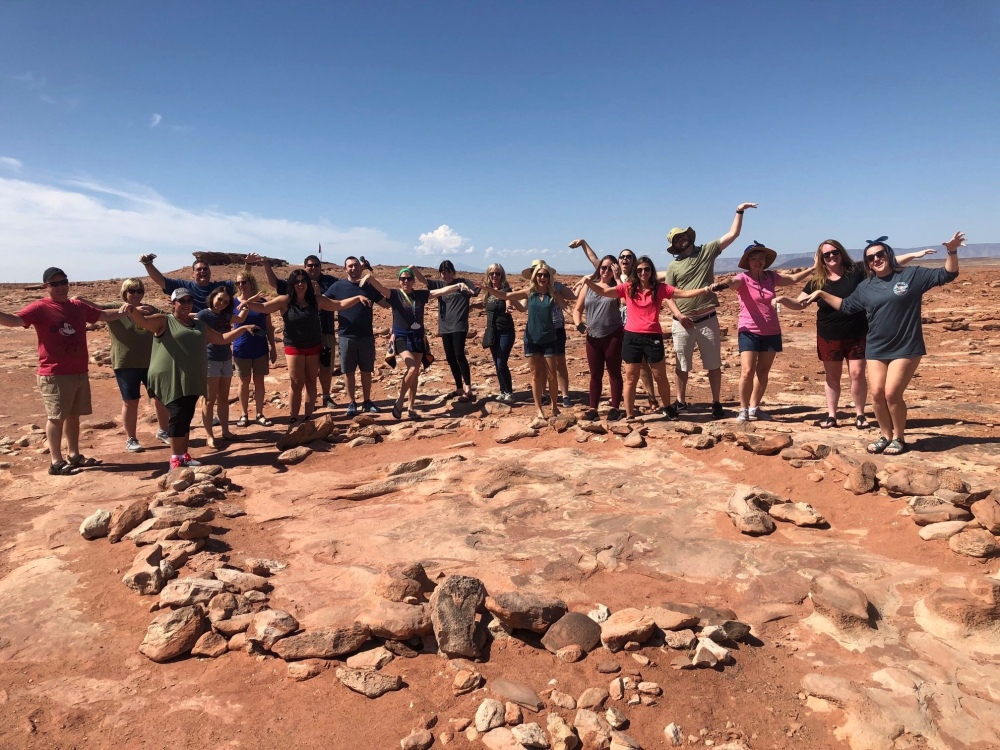 Back on the bus, and Doug began to play the Pixar movie “Cars”…it was cool seeing this after having been to Williams, AZ a couple days before and on our way to Monument Valley, both being inspirations for the artists who created the movie. Today, we would see about half of the movie before we arrived at Monument Valley, our hotel for the night and most importantly (lol) lunch for today! 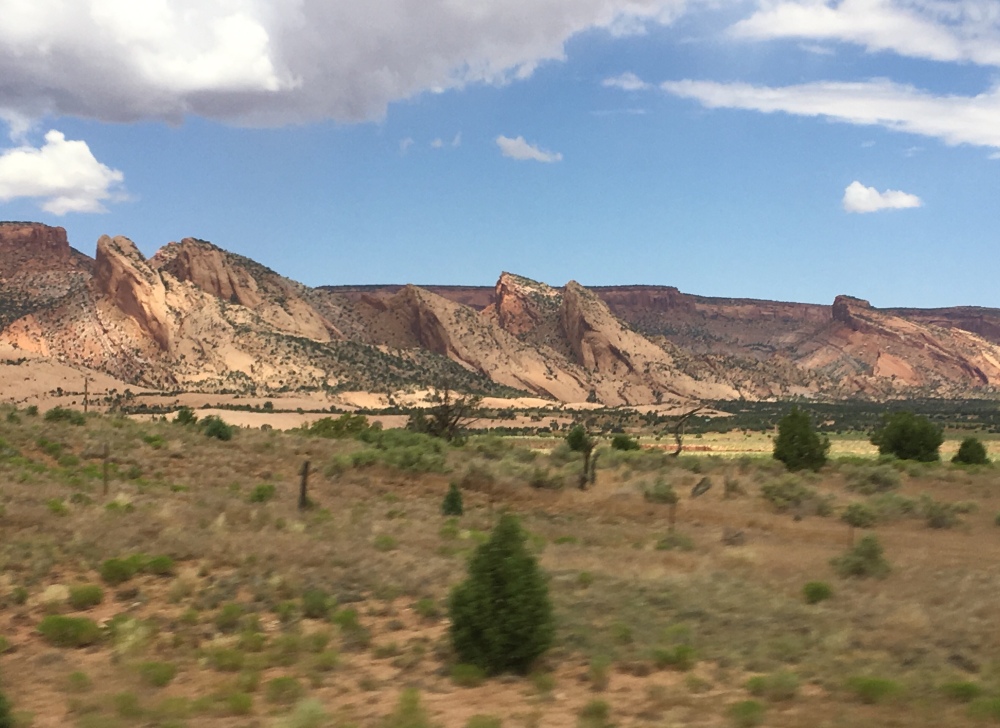 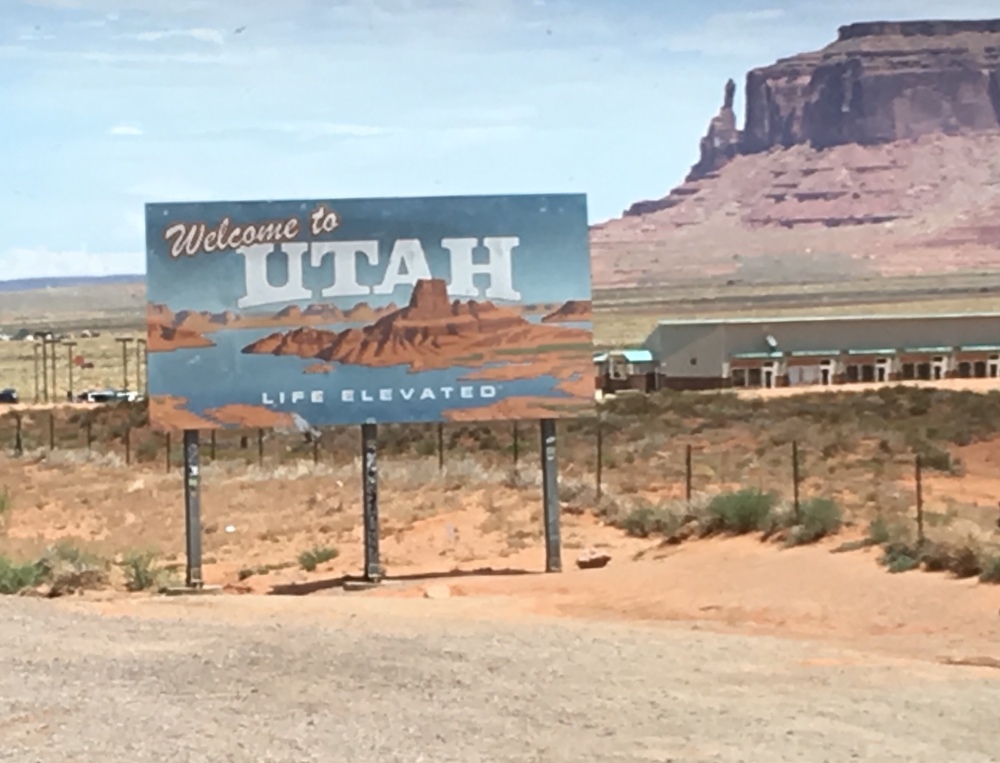 Tonight, we would be staying at Goulding’s, in Utah, but would be touring the Monument Valley, which is across the road from our hotel in Arizona. Lunch today was at the hotel restaurant, and by the time we arrived, they were ready for us. Christine and I ate at a table with Mark, and Doug joined us as well. We had a great lunch, and it was great to get to talk with Doug & Mark. 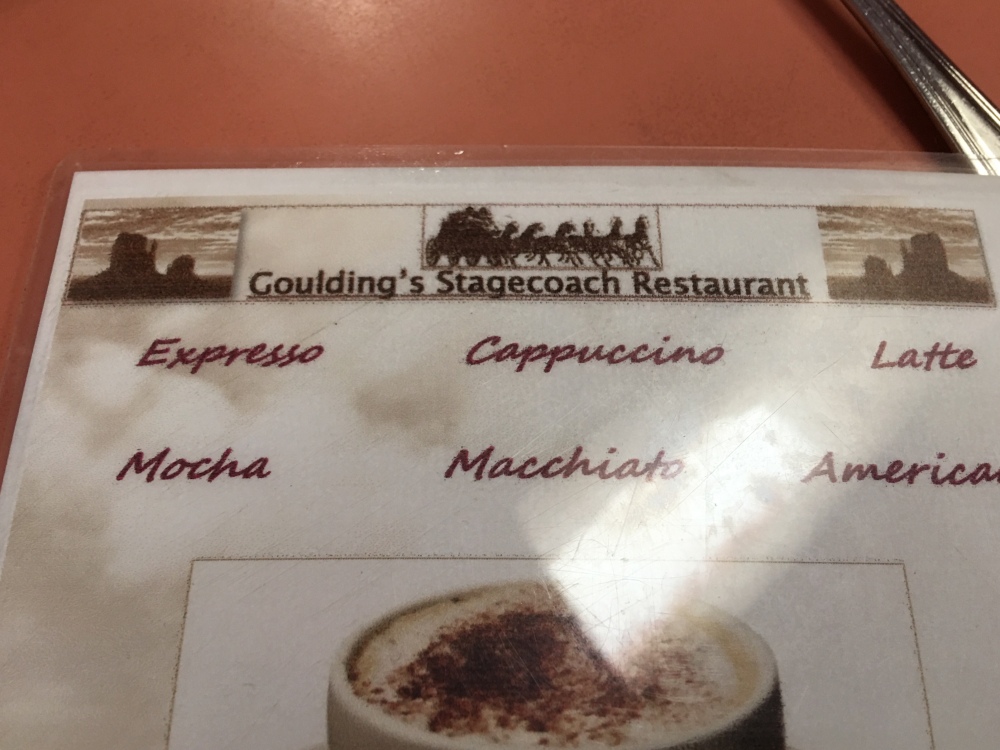 The scenery from this restaurant was wonderful. Seems like every place we’ve been has had just incredibly beautiful scenery. I think this trip has spoiled me just a bit. Now, every time I sit down at a table, I immediately look to see what the view is. And, so far, so many times I’ve been disappointed in what is out the window! Lol. This trip EVERYWHERE we went, it was gorgeous.

After lunch, we had some free time to explore the area, the resort had several photo opportunities, a gift shop and a display from a John Wayne movie that was filmed here. 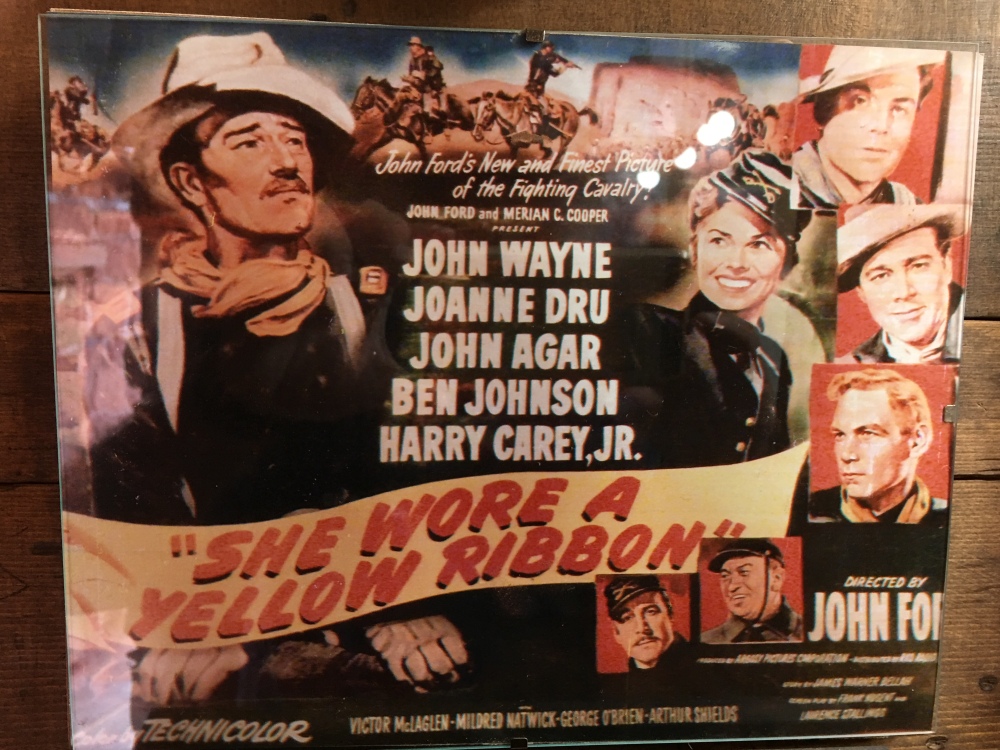 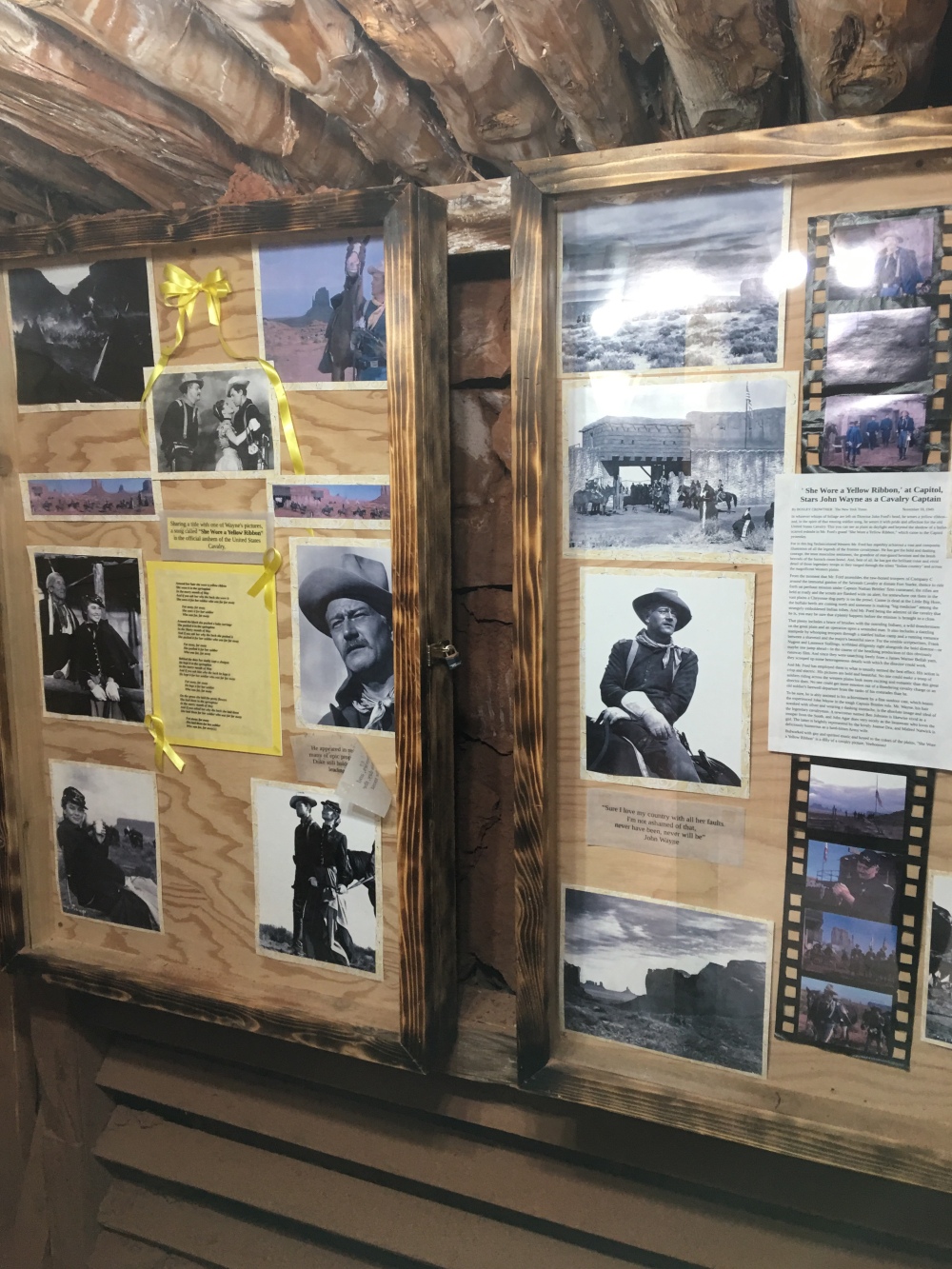 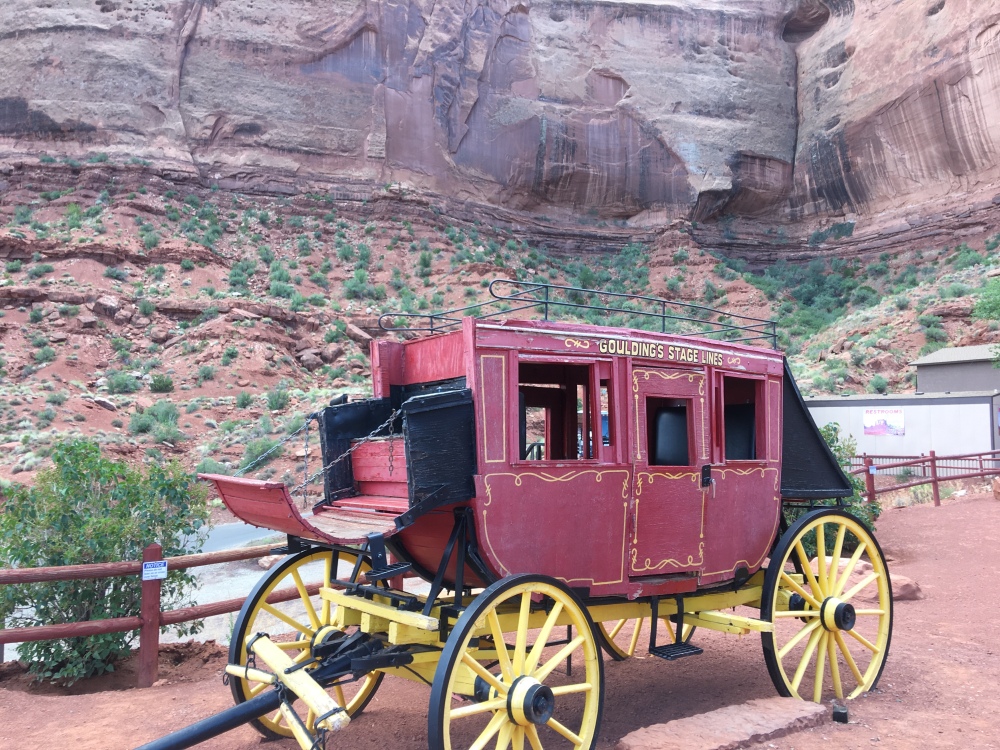 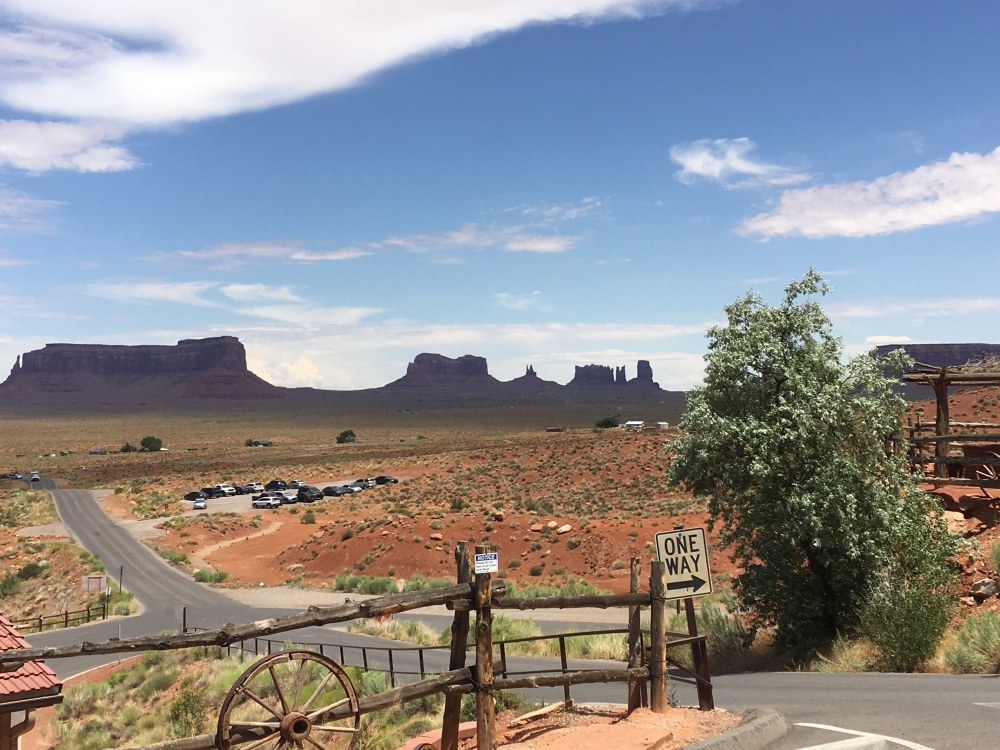 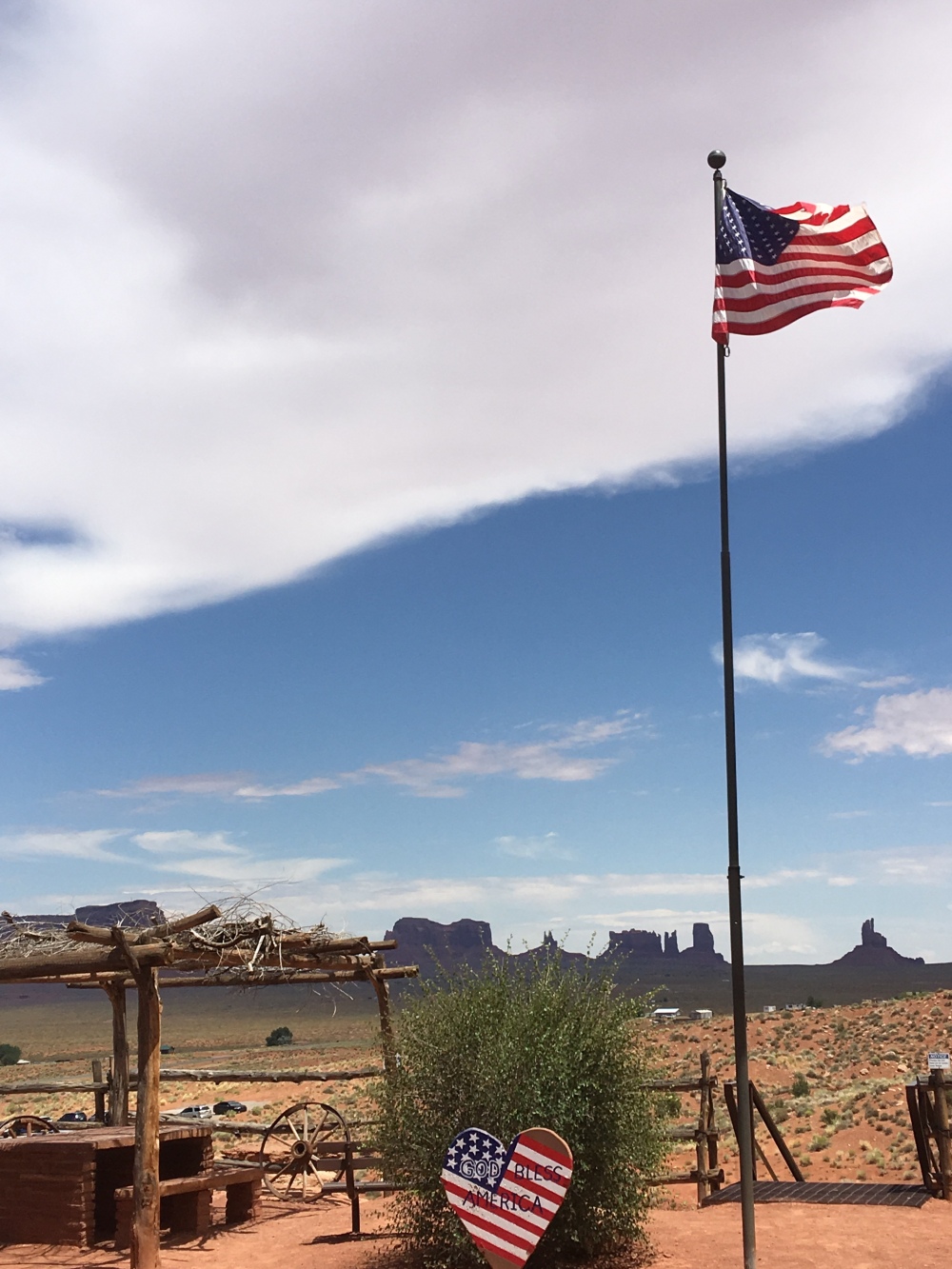 And it was time for our “Step-On Guide” for the day to lead the tour through Monument Valley. She had stories to tell about the area & her family; and told us all about the buttes and assorted natural rock formations that make up the valley. I learned a lot, and still can’t believe how much I was learning, while having an AMAZING time in this beautiful country of ours! 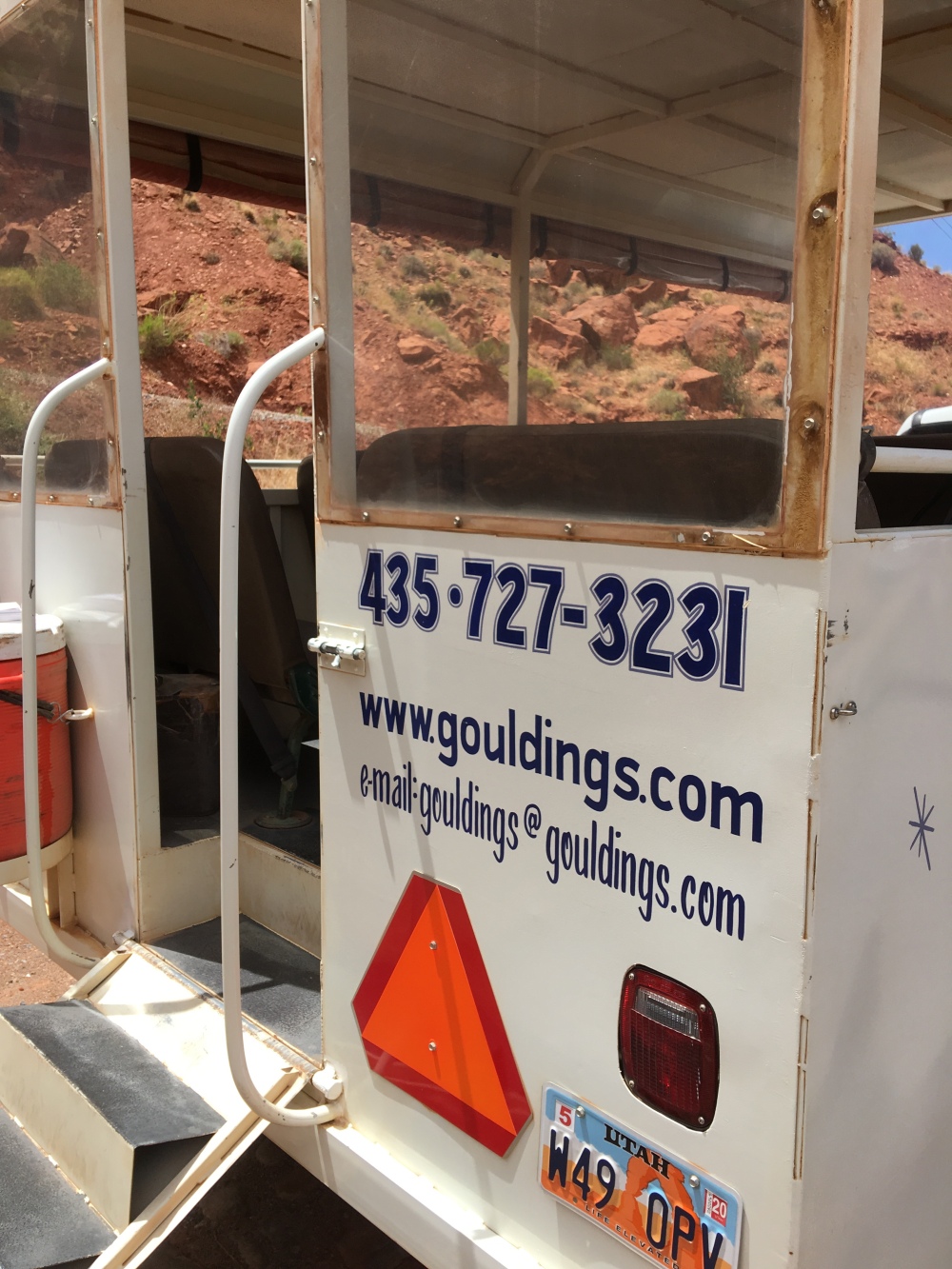 Here’s a few of my favorite photos that I took during the tour: 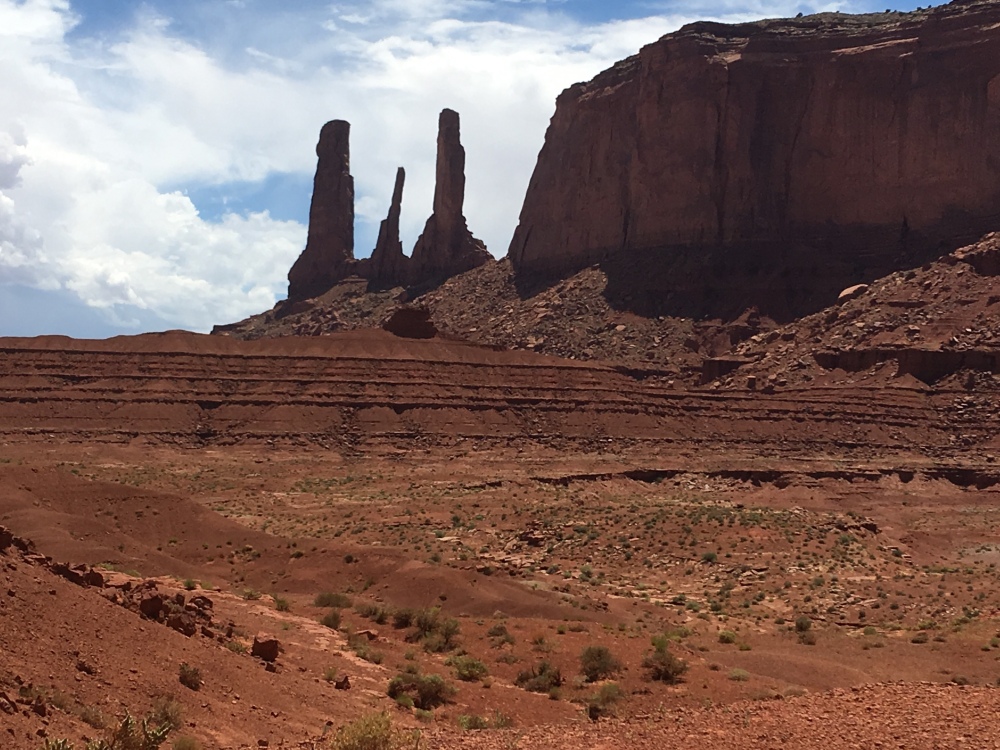 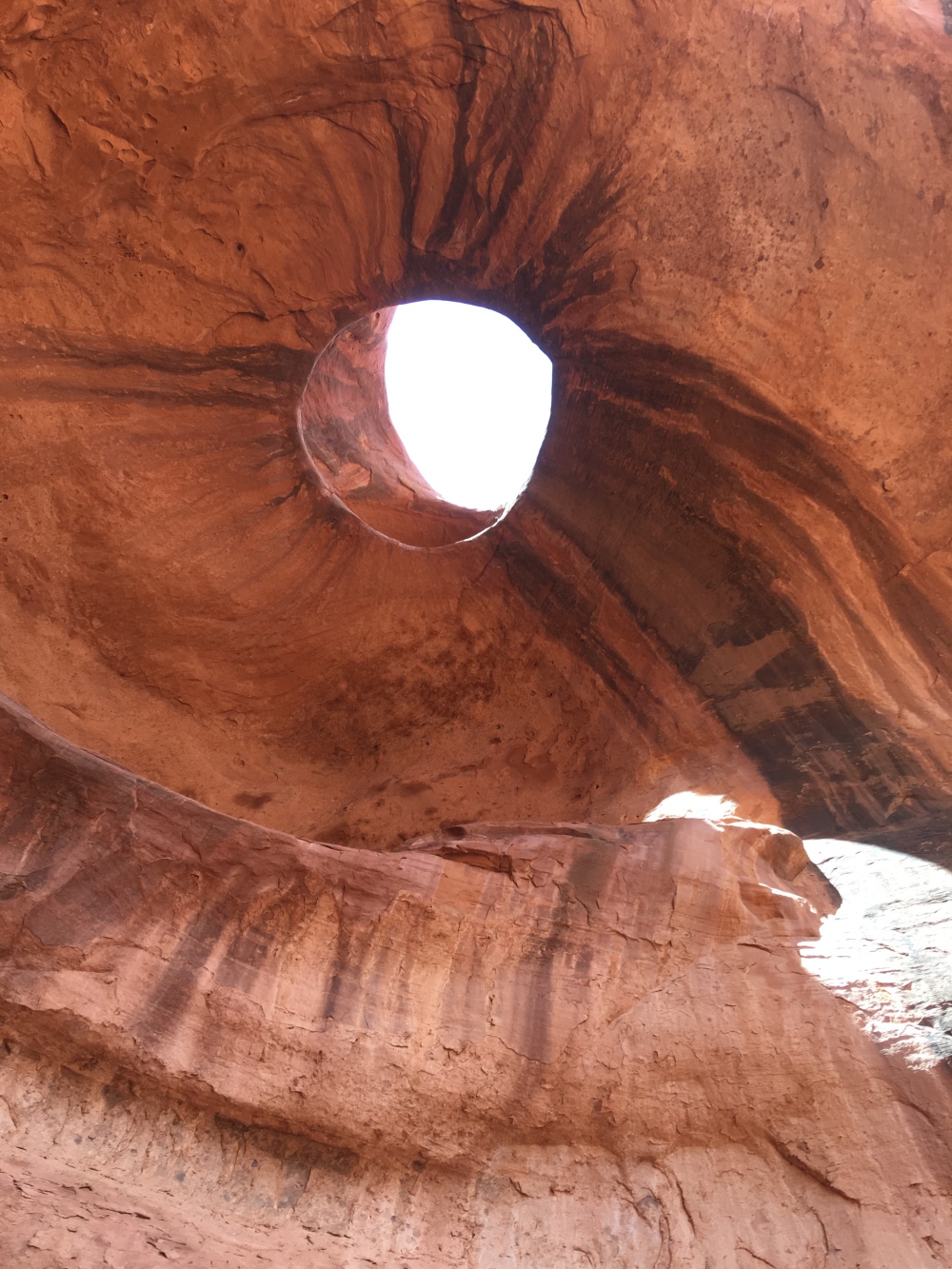 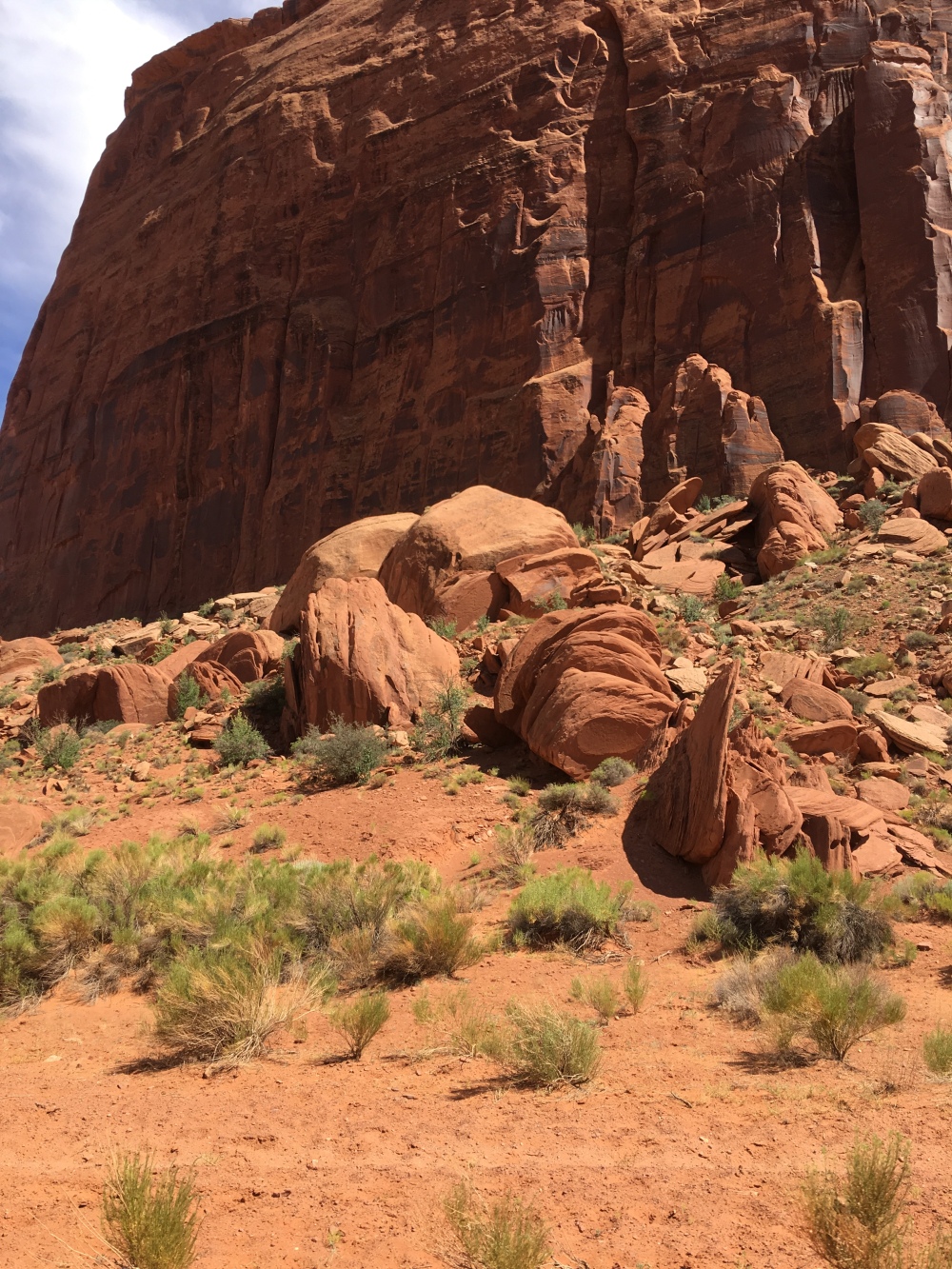 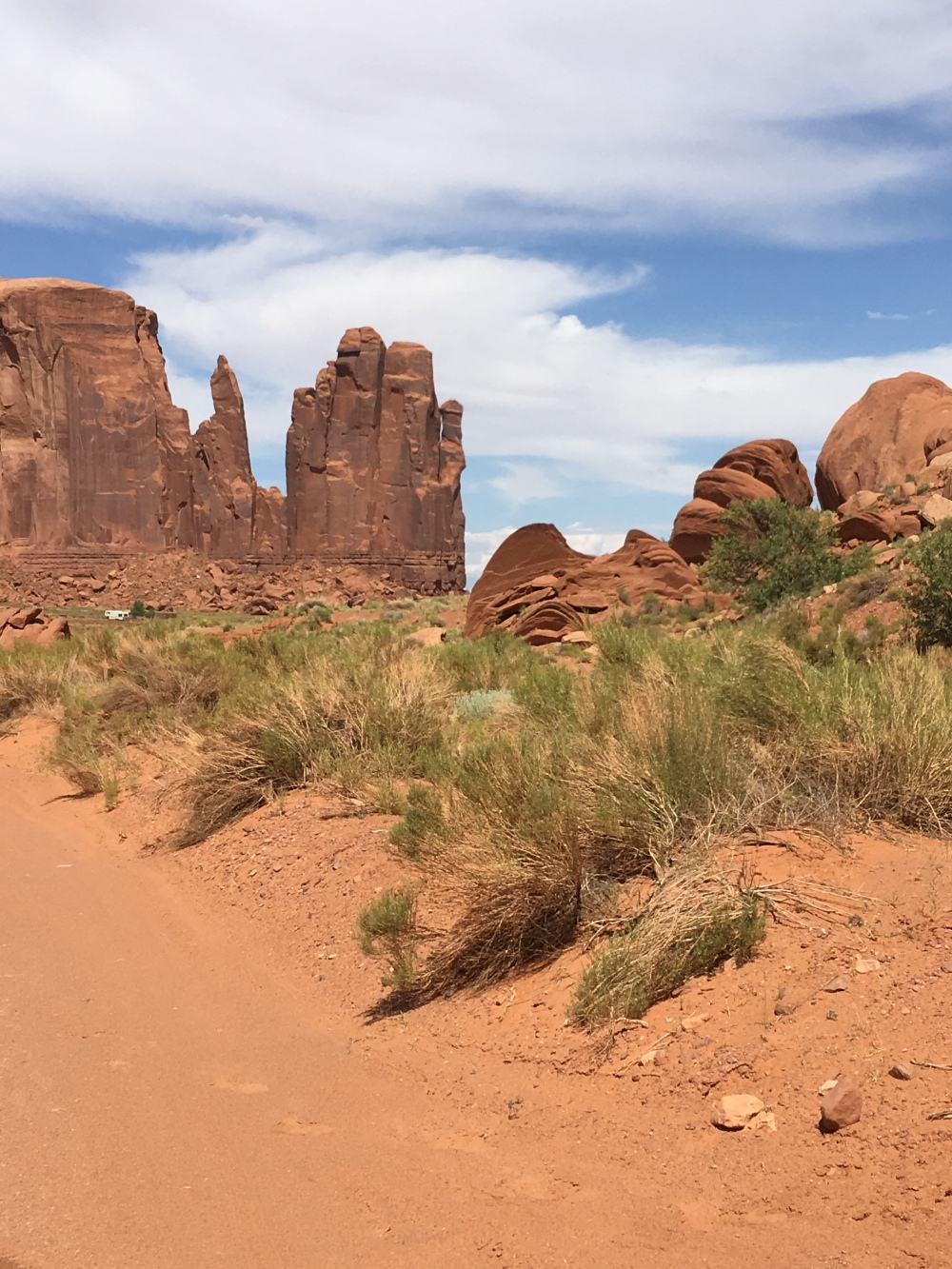 Before the tour ended, we stopped at an outpost that sold drinks, Native American arts & crafts and had a photo opportunity where you could sit on a horse. Before everyone got to the horse, I took my absolute favorite picture. 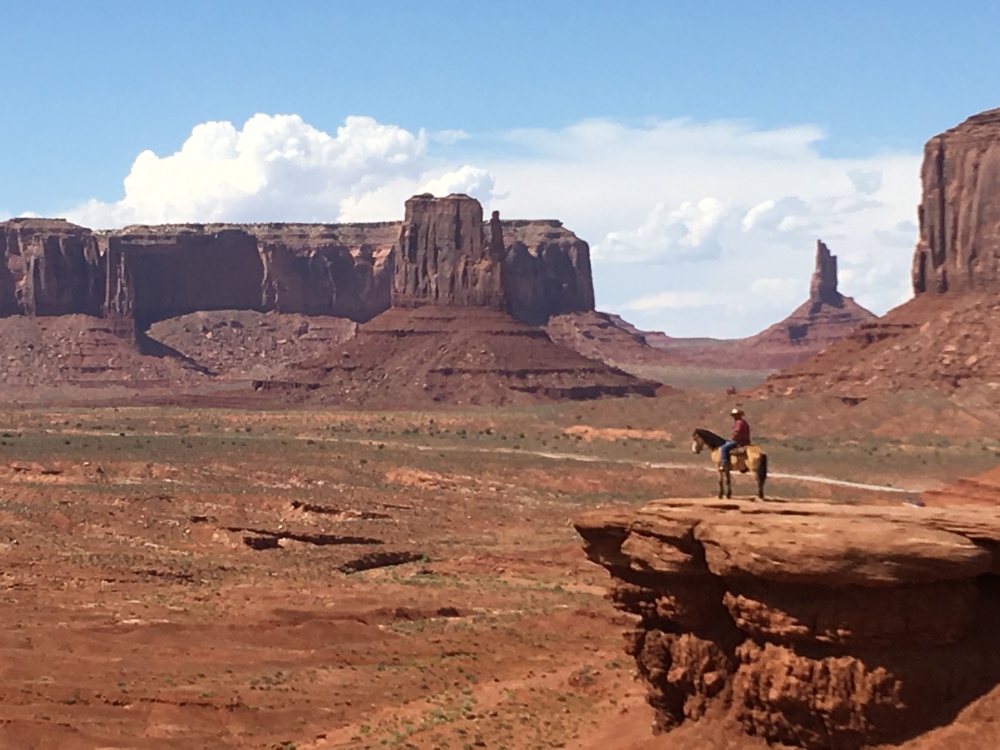 After the rest stop, we were driven back to our hotel, where Doug & Diana handed out our room keys. We had a couple of hours of rest before tonight’s activity: a cookout in the desert and my first taste of a Navajo Taco! We got our room keys and made it to our very own casita for the night. Of course, our luggage was already in the room waiting on us. 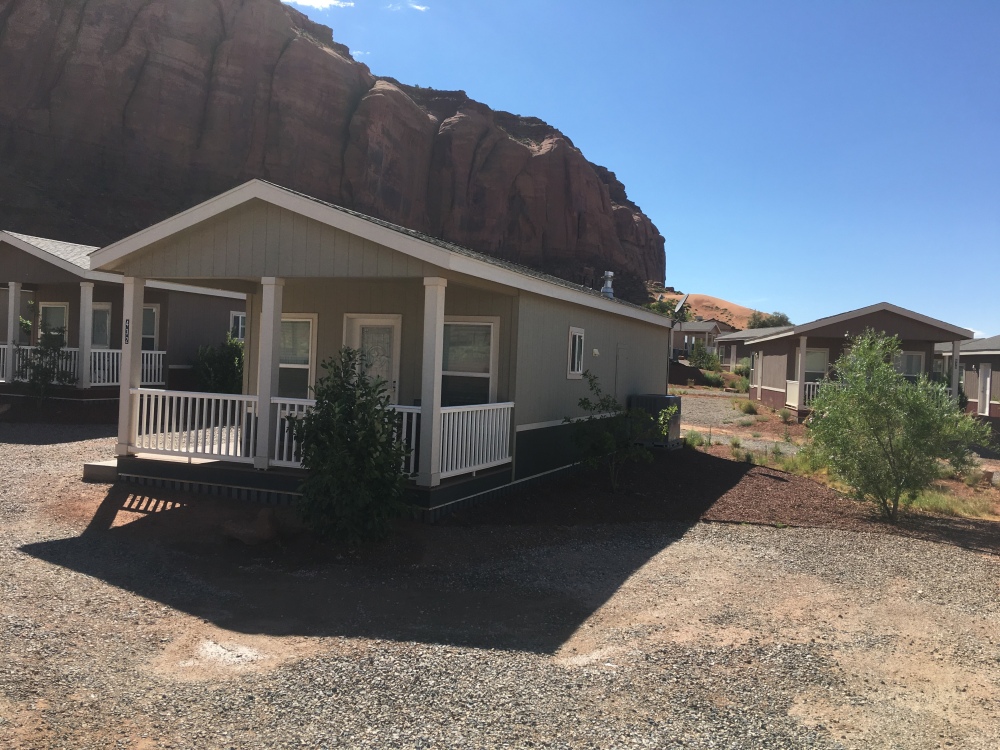 After a rest, we were picked up by the tram and were transported out into the desert for dinner. Again, this was simply an amazing place to have a meal! 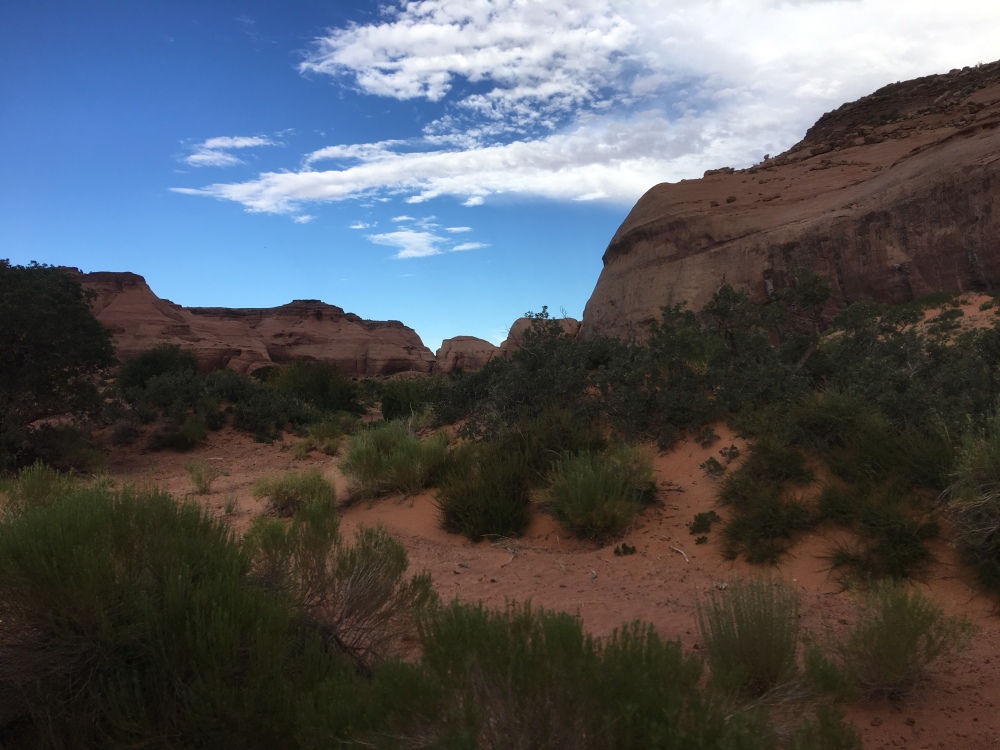 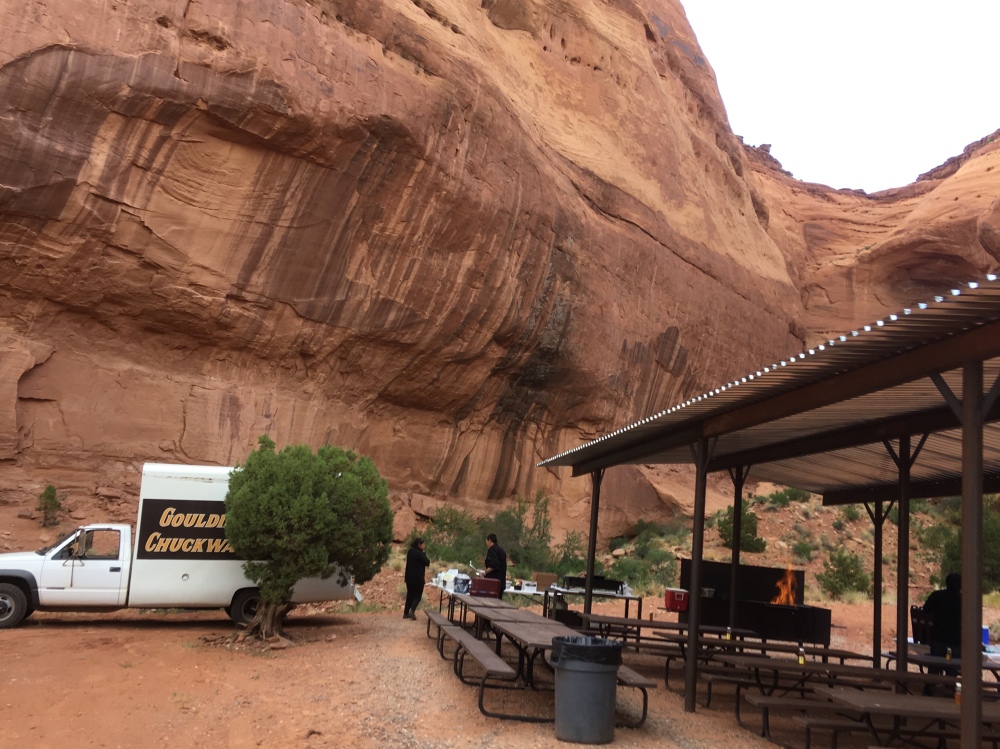 After we arrived, our hosts were (of course) already preparing our food. Beverages were ready, and we also had a demonstration on how to make fried bread, and we could even fry our own and eat it with some honey. Of course this was fun and delicious! 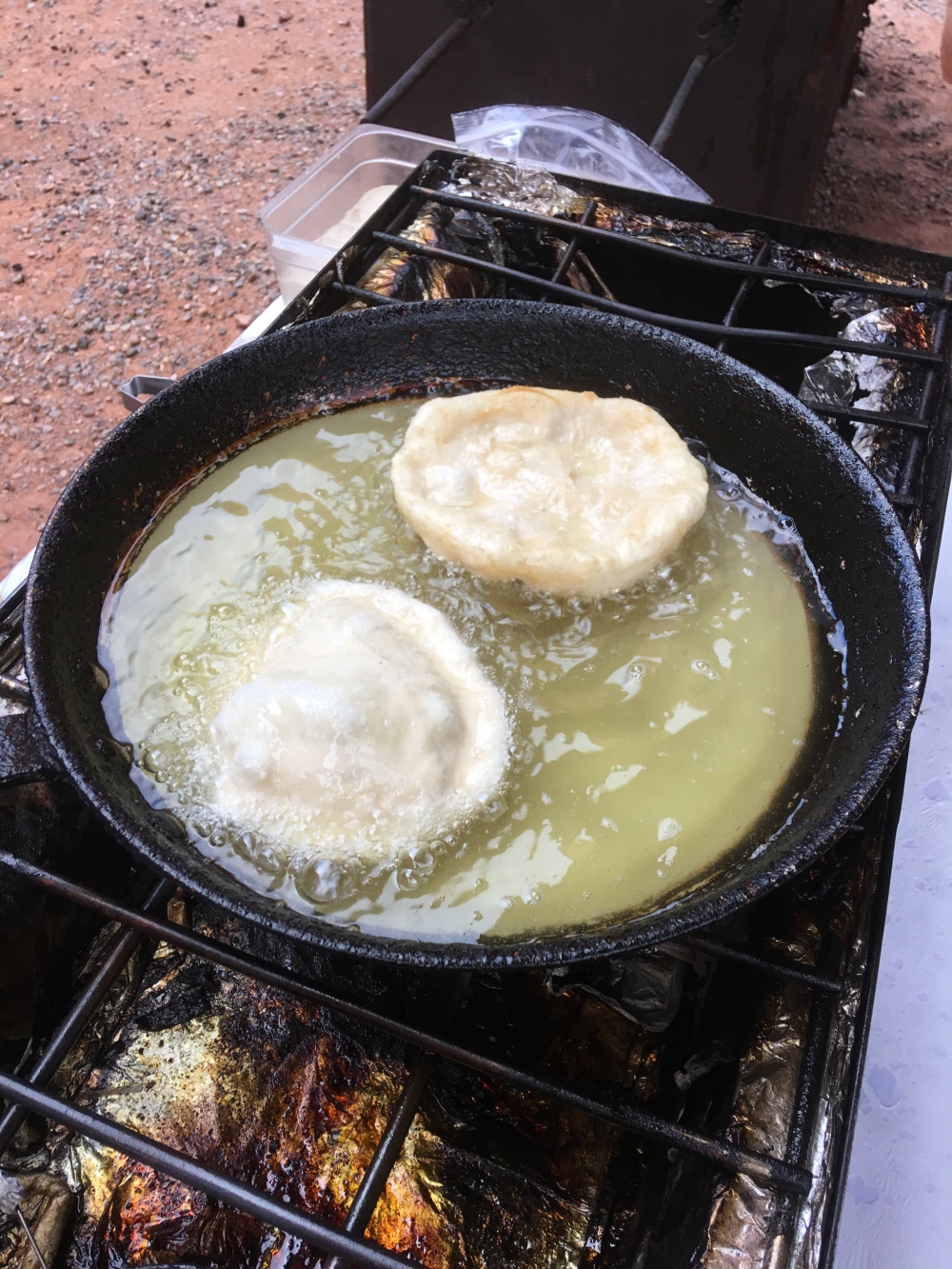 Before we knew it, it was time for Navajo Tacos. I didn’t know what to expect, but basically it was Navajo fried bread, with chili, cheese, and lettuce, onions and tomatoes, topped with salsa.  Delicious. 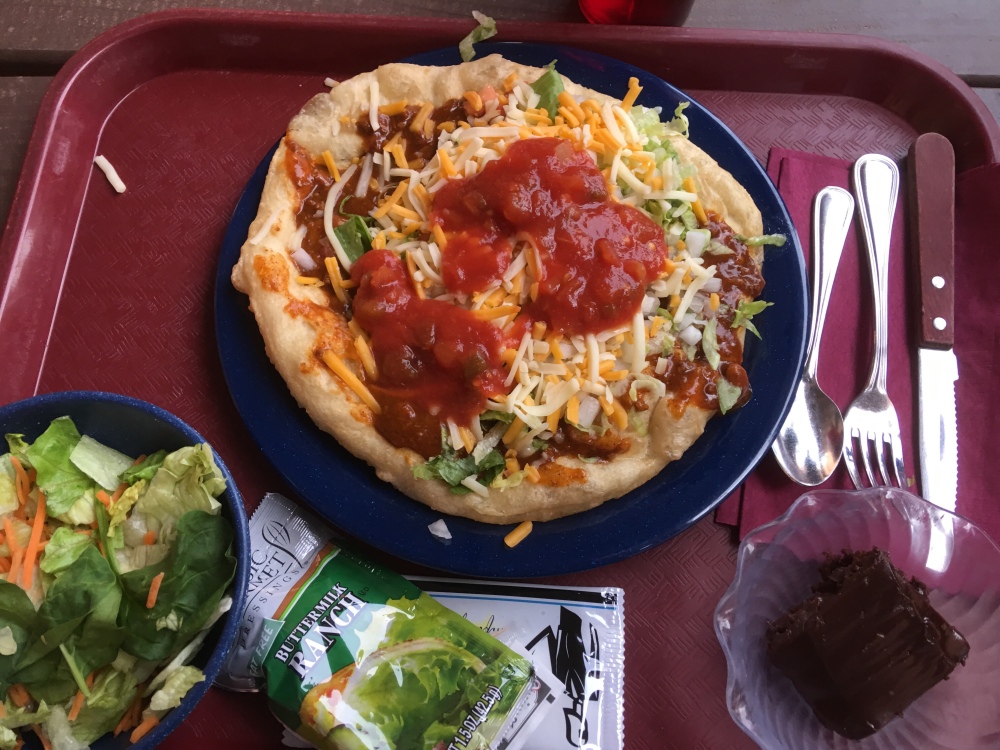 After dinner, it was on to the campfire and to learn about these Native American people. Simply fascinating!

Also, we were again treated to the Disney/Navajo song, where everyone danced around the campfire.

And after some singing and dancing, we were give our pin of the day!

After the festivities had ended, we were taken back to our hotel, and were told about an optional hike we could join in to watch the sun rise over Monument Valley. Christine and I decided that if we were up, we would do that. Would we make that hike?

To read about the other days of my trip:
My Adventures By Disney vacation begins! Into the West, Day One!

My Adventures By Disney Vacation Continues! Into The West, Day Two!

My Adventures By Disney Vacation Continues! Into the West, Day Three!

My Adventure By Disney Vacation Continues! Into The West, Day Four!

My Adventures By Disney Vacation Continues! Into The West, Day Five!