Another early morning! (Seems like a pattern!) I slept really well on our first night at the Grand Canyon. The Thunderbird Lodge may not look as nice as the Enchantment Resort, but the bed and the linens were fantastic!

This morning, our breakfast was next door at the famous El Tovar Lodge. The El Tovar is right next door to the Thunderbird, with both hotels on a paved walking trail by the rim of the Grand Canyon. This first picture was taken immediately after leaving our room. (30 steps to the rim!!!). We had a beautiful walk to breakfast! 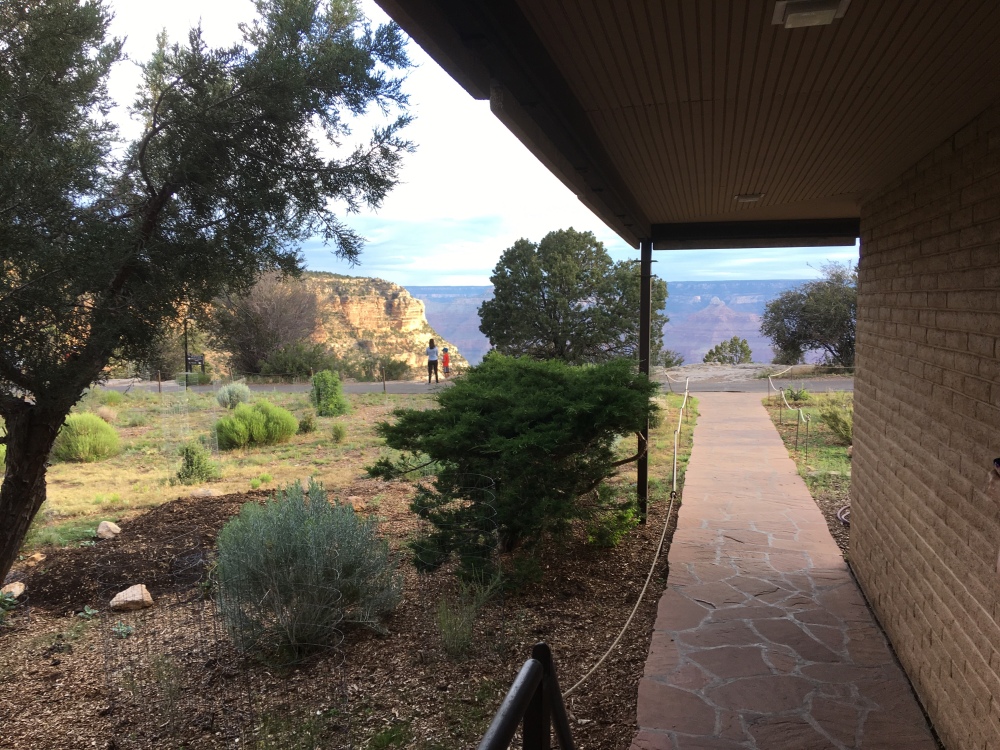 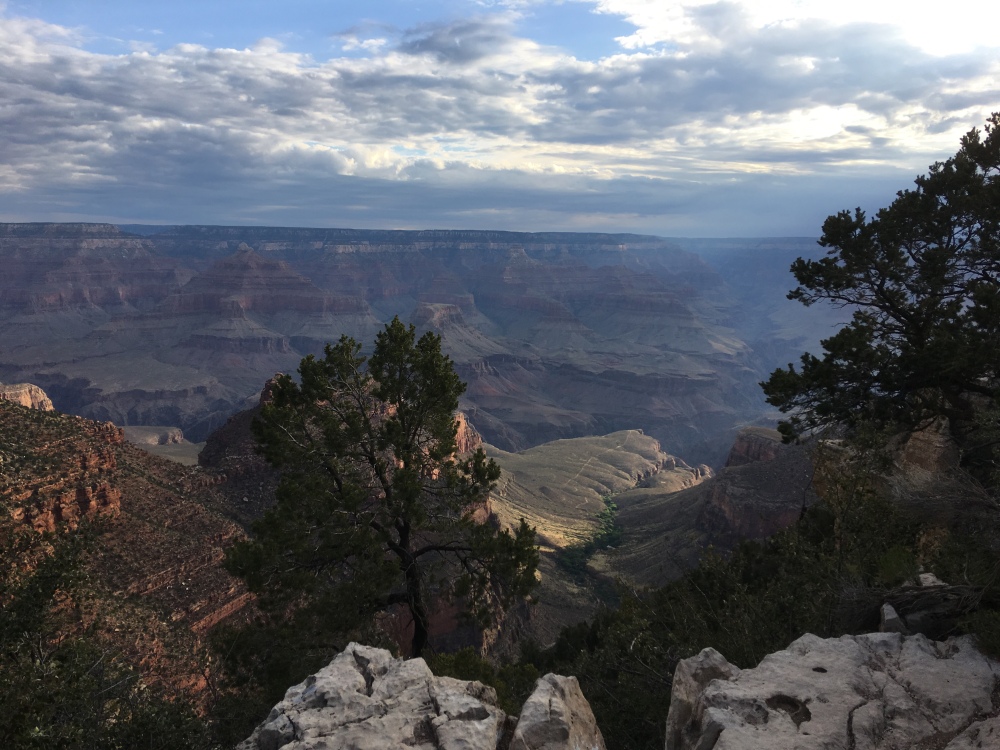 The El Tovar Lodge was featured in National Lampoon’s Vacation (the first one) and is where Chevy Chase robs a hotel.  I found this picture on the internet:

I’d really like to stay here on my next visit to the Grand Canyon. The place looked incredible! 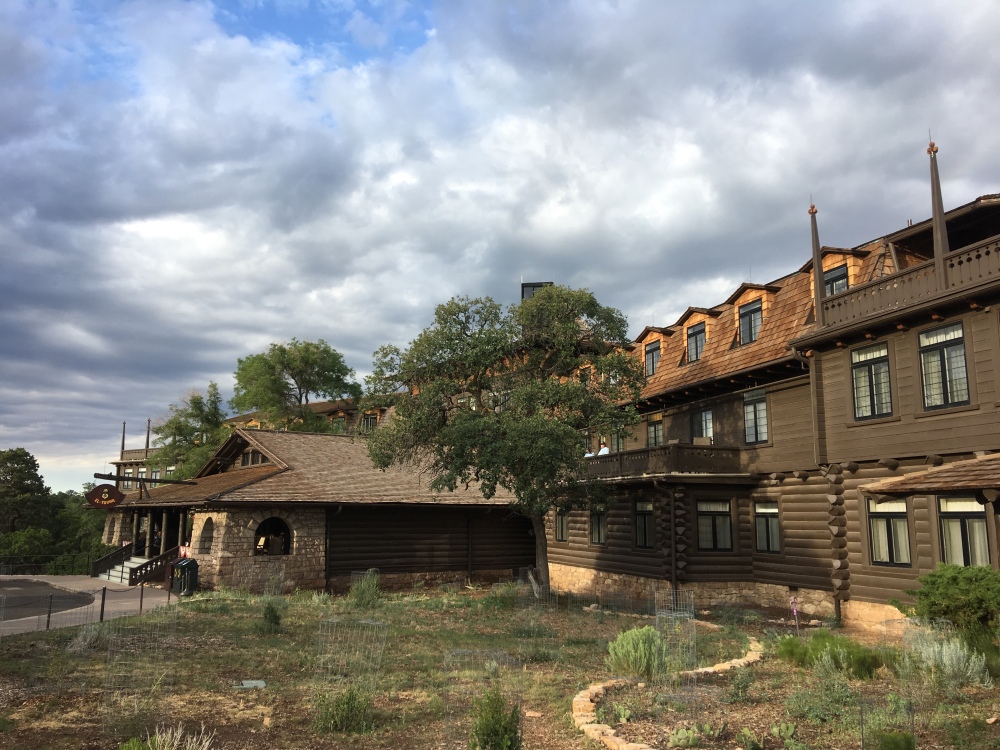 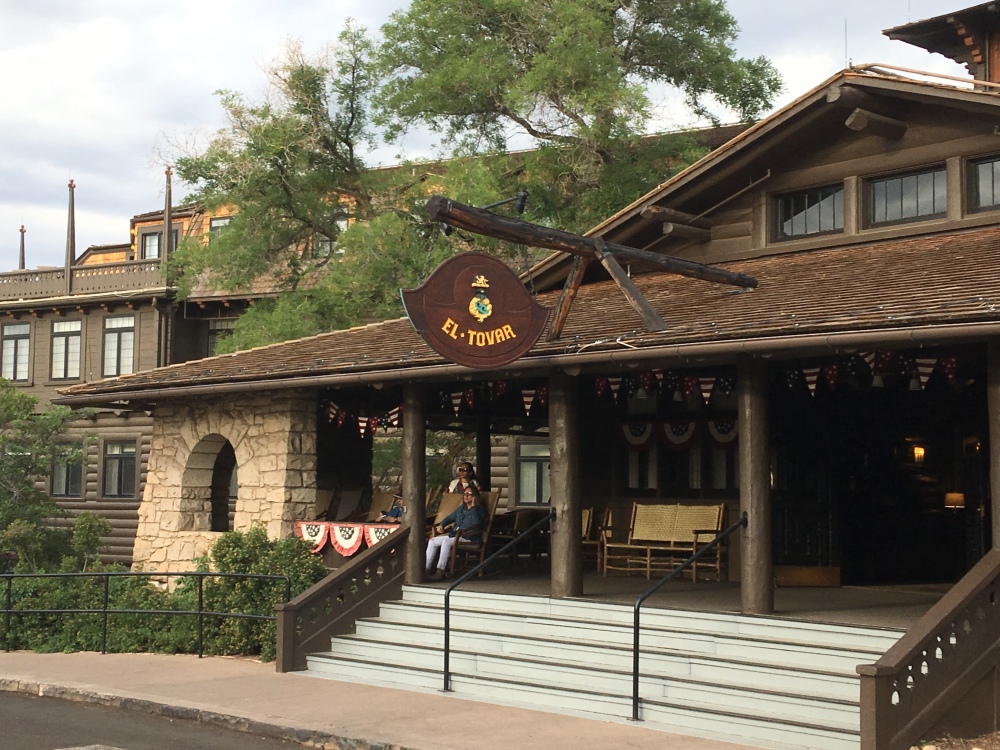 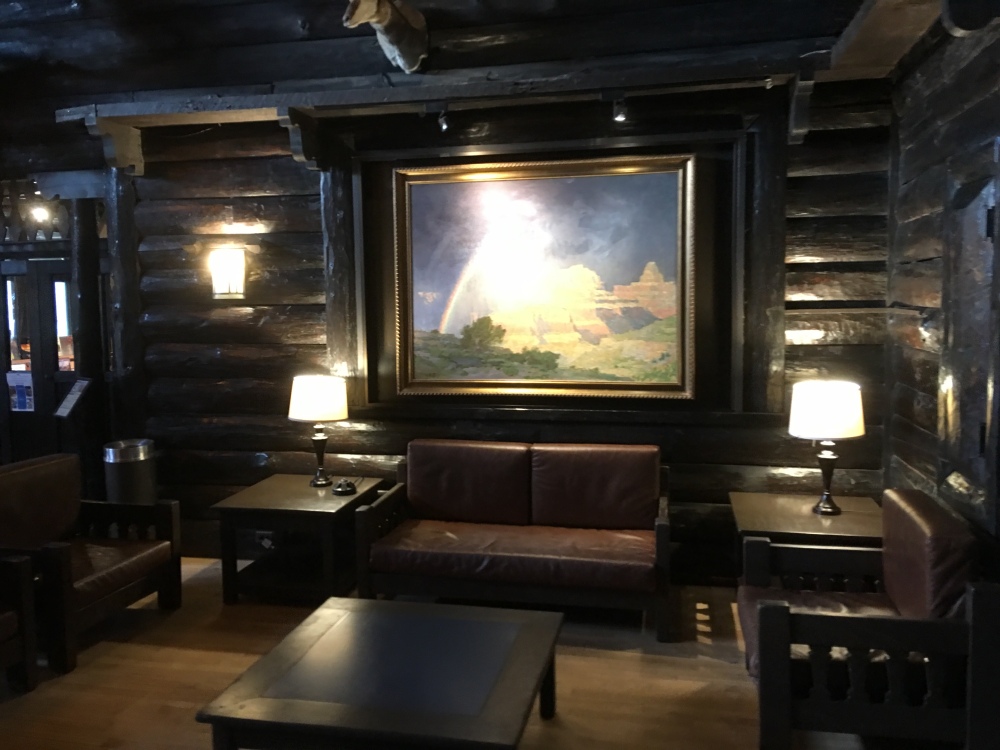 This morning, breakfast was included, we had “coupons” that the ABD Guides had given us, and basically we could order anything from the menu. The two meals we had at the El Tovar were probably my favorite breakfasts of the trip! This morning I had the Prime Rib Hash, and it was amazing. 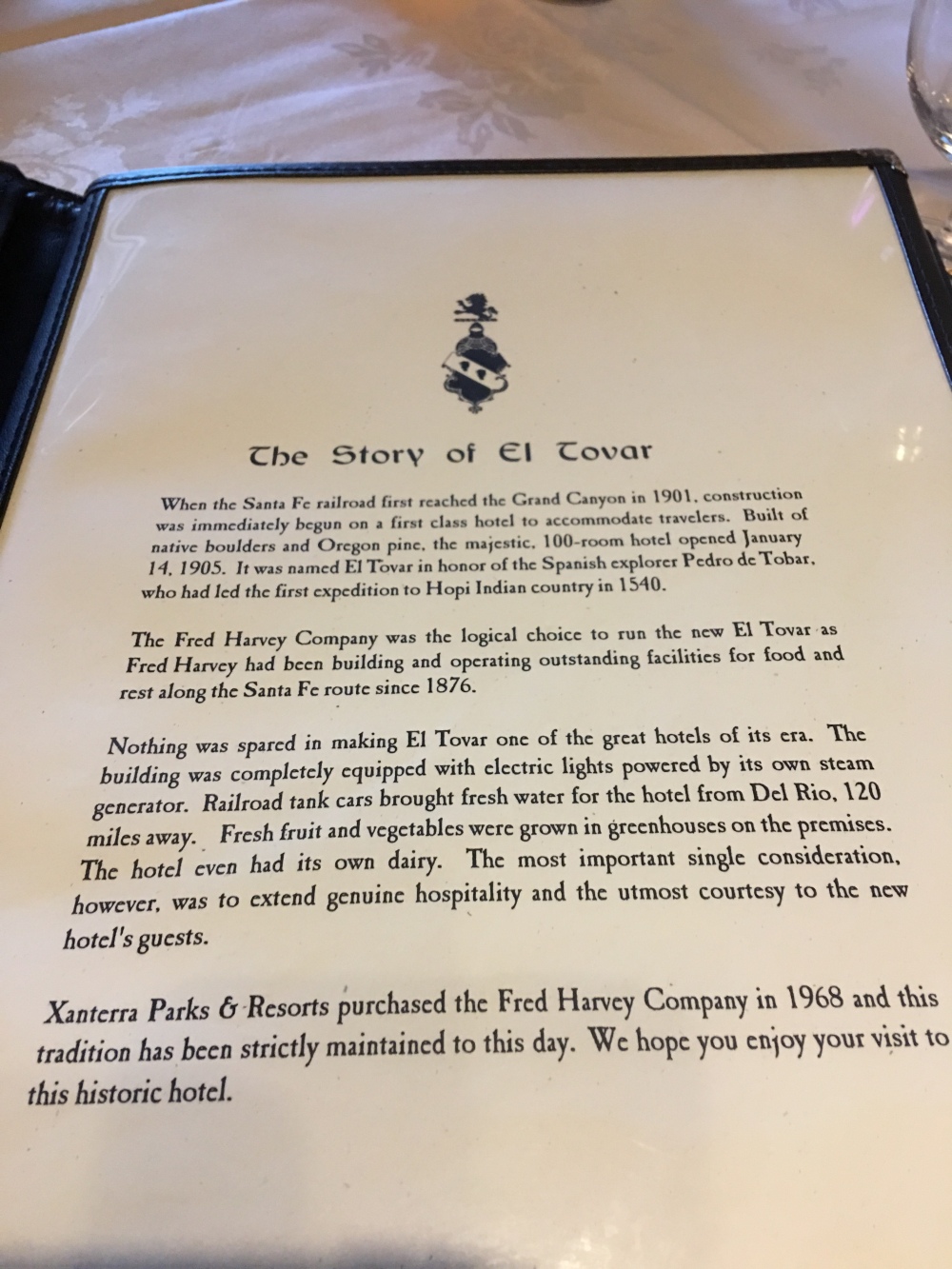 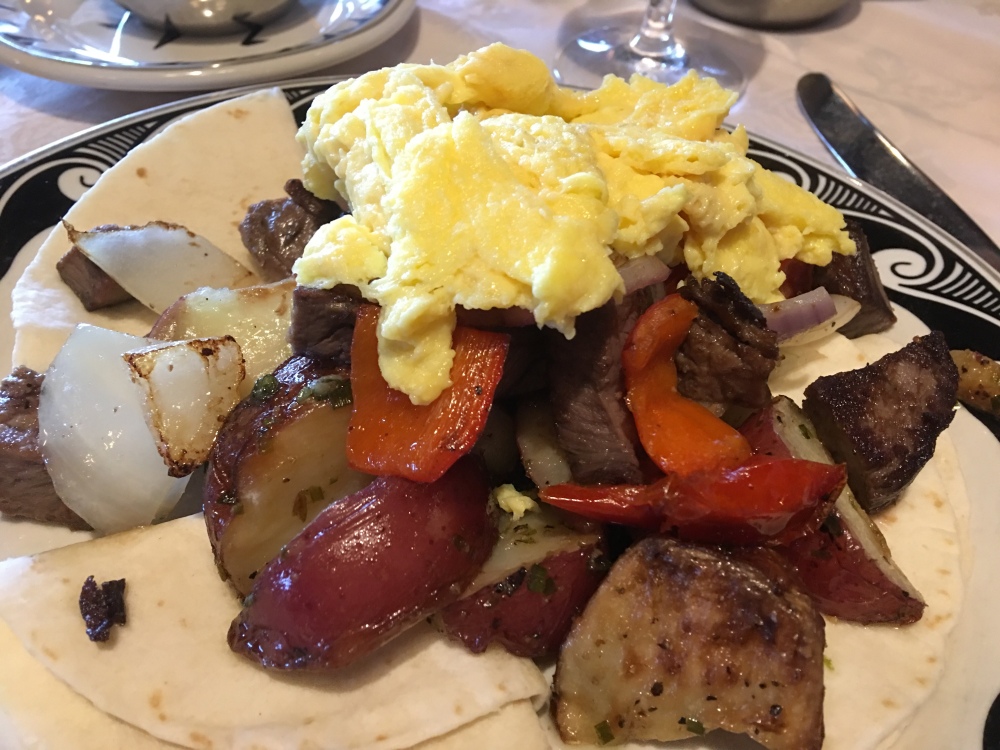 After breakfast, it was time to meet the group for our tour of the Grand Canyon. Today, we had a step-on private naturalist guide join us for our unforgettable journey along the South Rim. 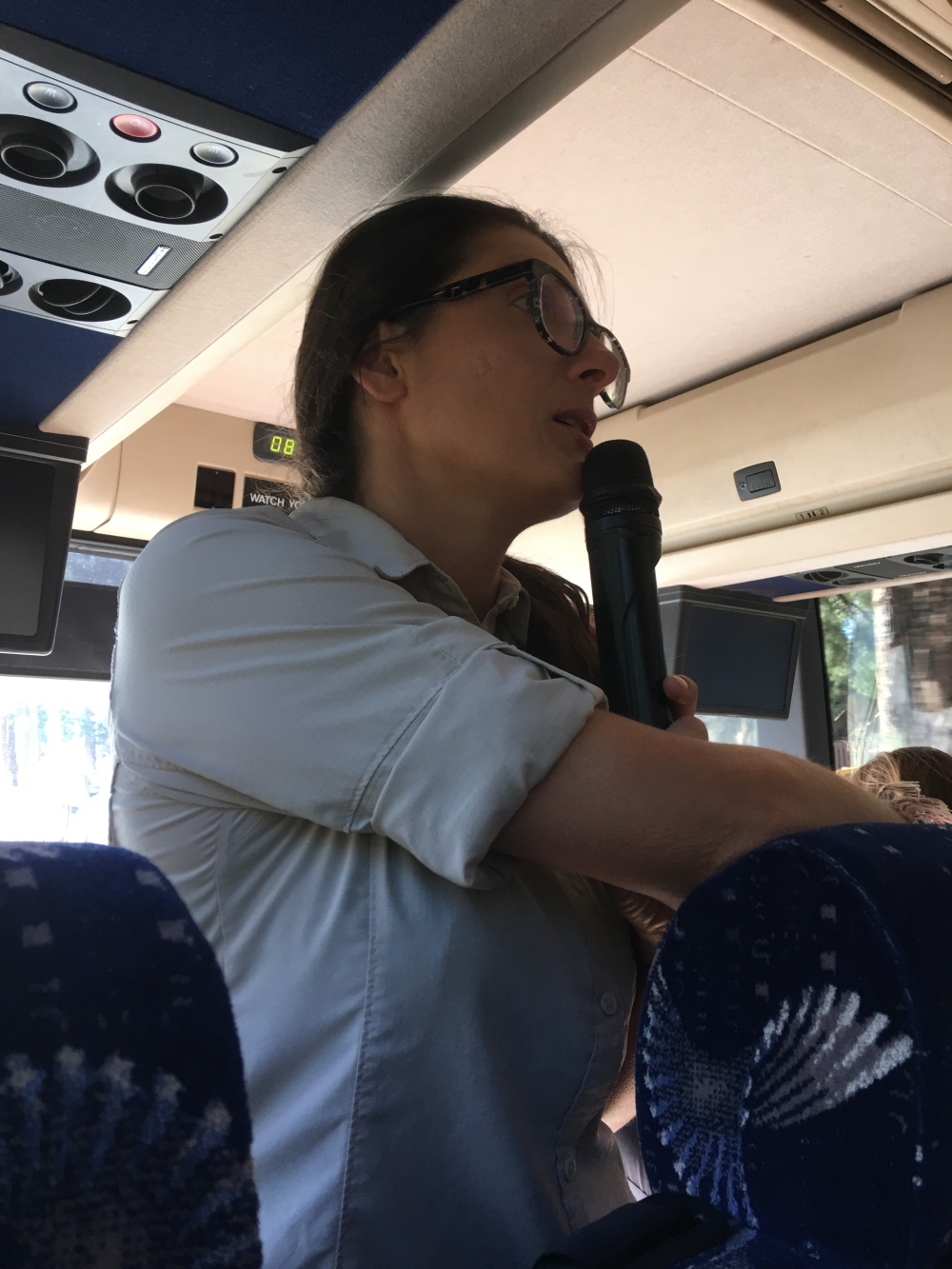 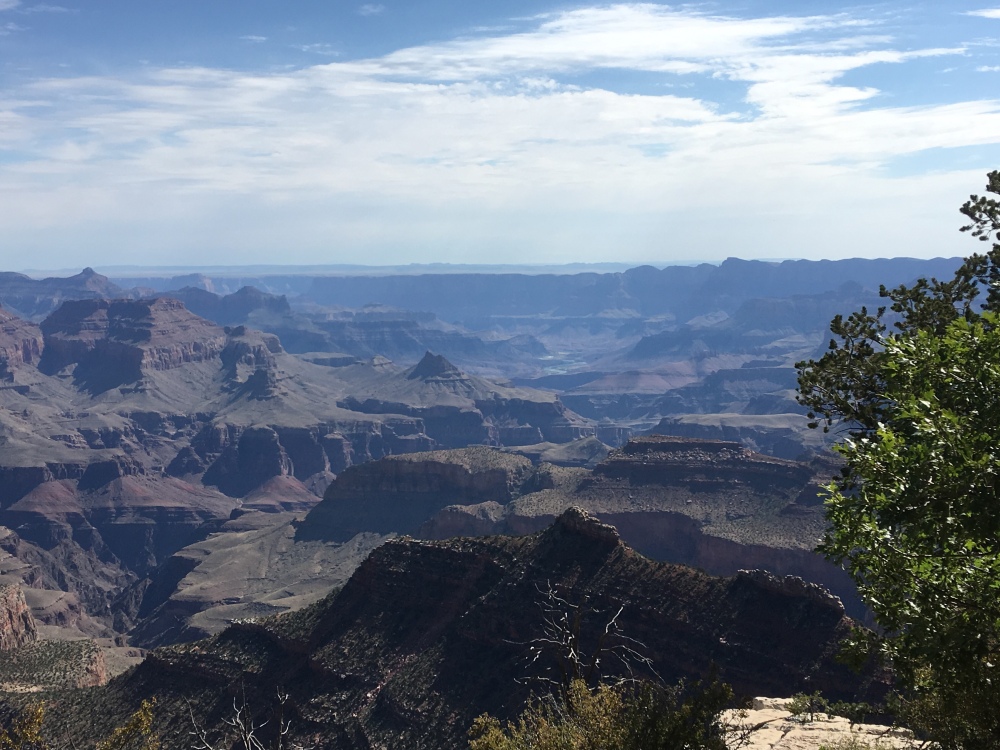 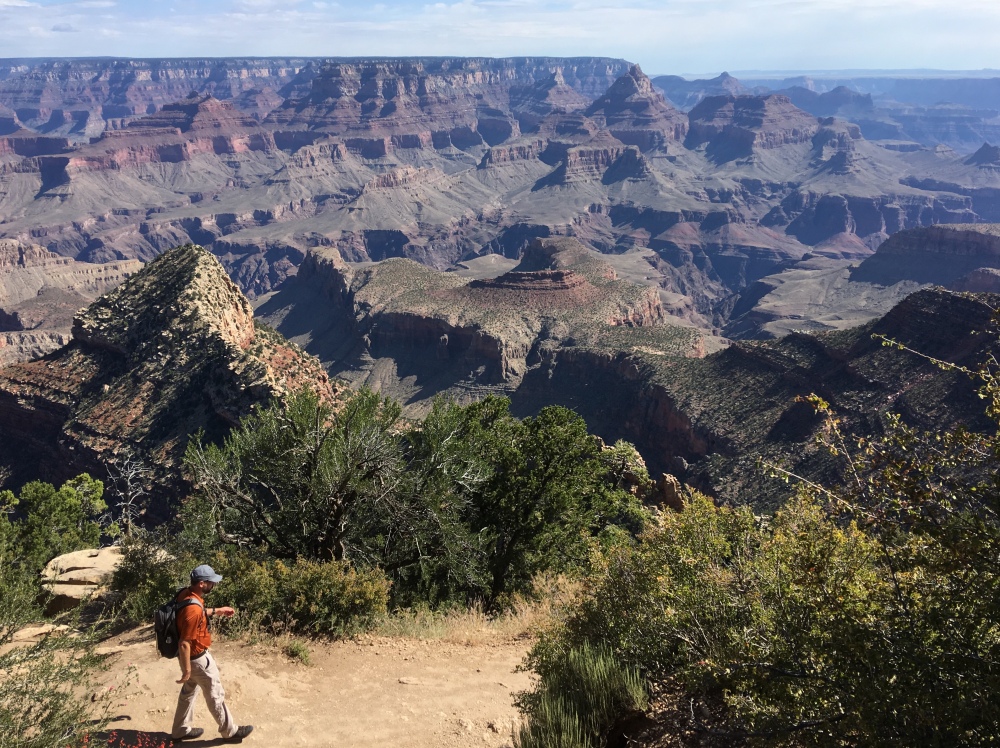 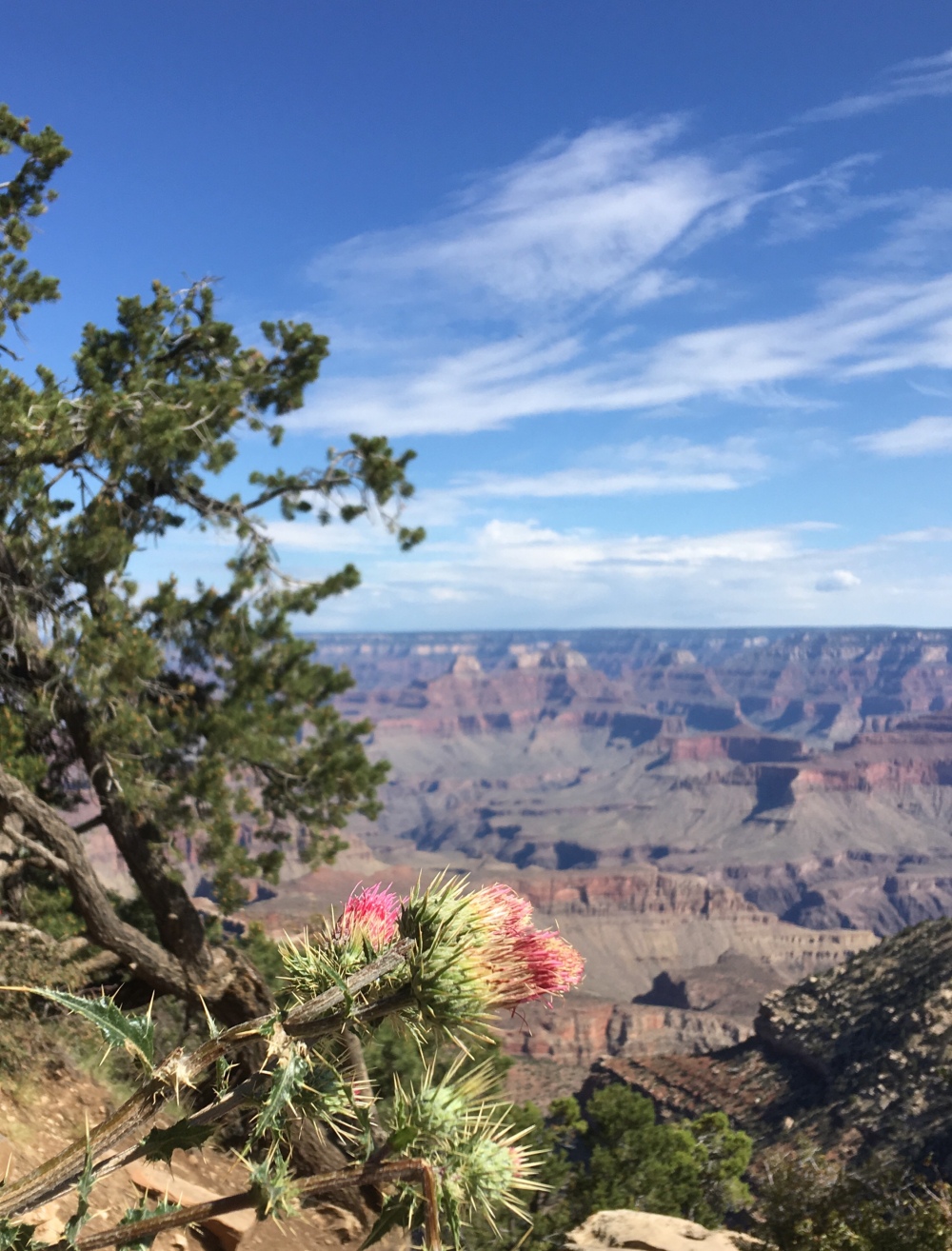 And, today Doug took one of my favorite pictures of myself. I was a nervous wreck, because I was so high up, but it was safe (or the Guides wouldn’t have allowed it)

We learned all about how the canyon formed, the first tourists who visited the canyon, & the people who promoted & built the first resorts. We also got to see the Colorado River for the first time today. (We’ll Be rafting down the river in a few days!).

To be perfectly honest here, I would have never thought learning so much about history would be how I’d like to spend part of my vacation, but it was truly fascinating and the only thing I regret is not taking better notes!

Mary Colter (one of the few female architects of the day), & the Kolb Brothers and their fascinating photography are just a few of the people we learned about, their stories are fascinating, and I’ll be searching my library to learn even more about them! 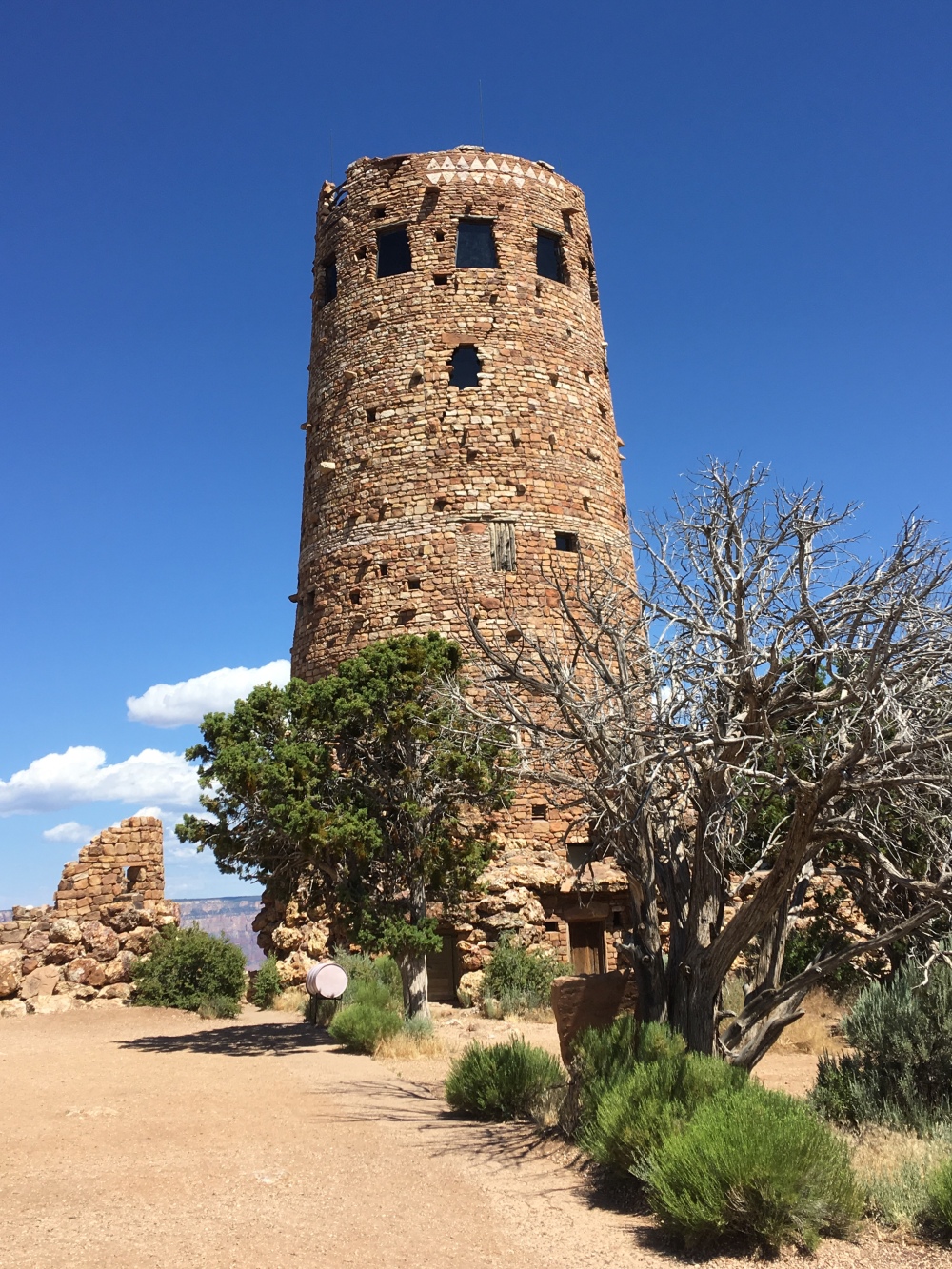 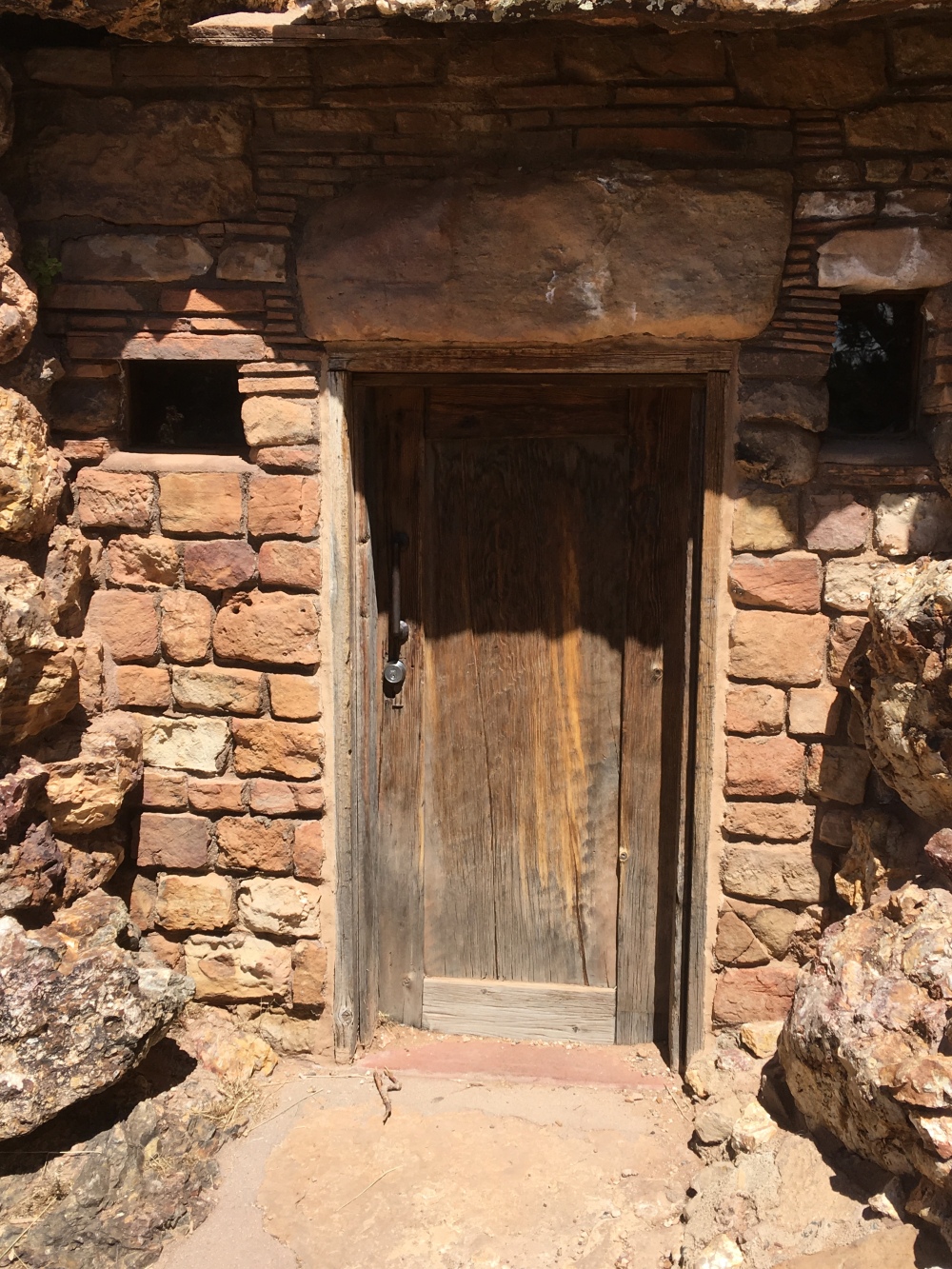 After our outdoor “history lesson” it was time for another pin! Today, our Naturalist Guide handed them out! I loved getting a new pin every day, and couldn’t wait to see the character featured on it! 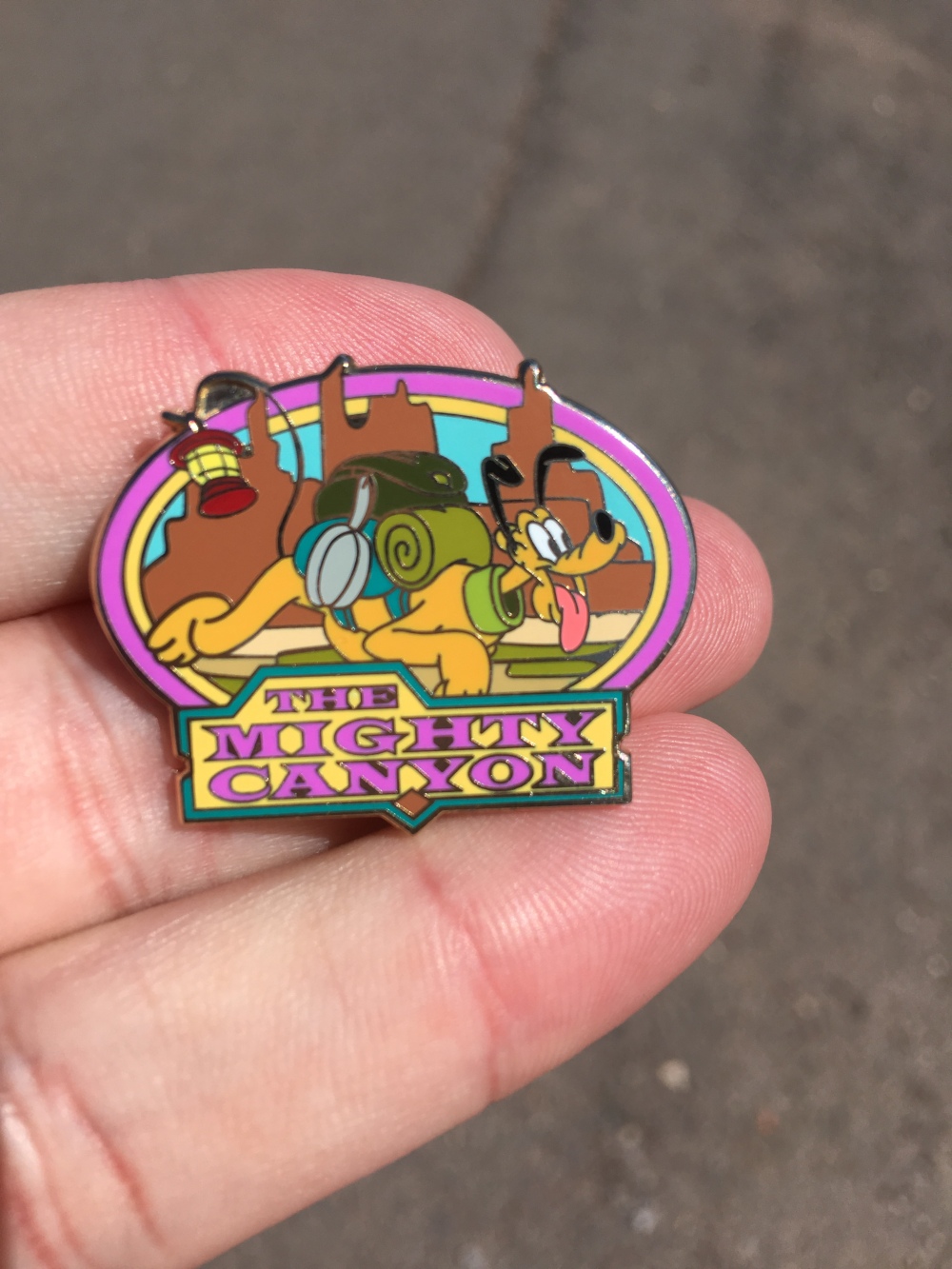 We were then taken back to the Grand Canyon Village for a short hike along the rim. Here is where I smelled my first Ponderosa Pine! 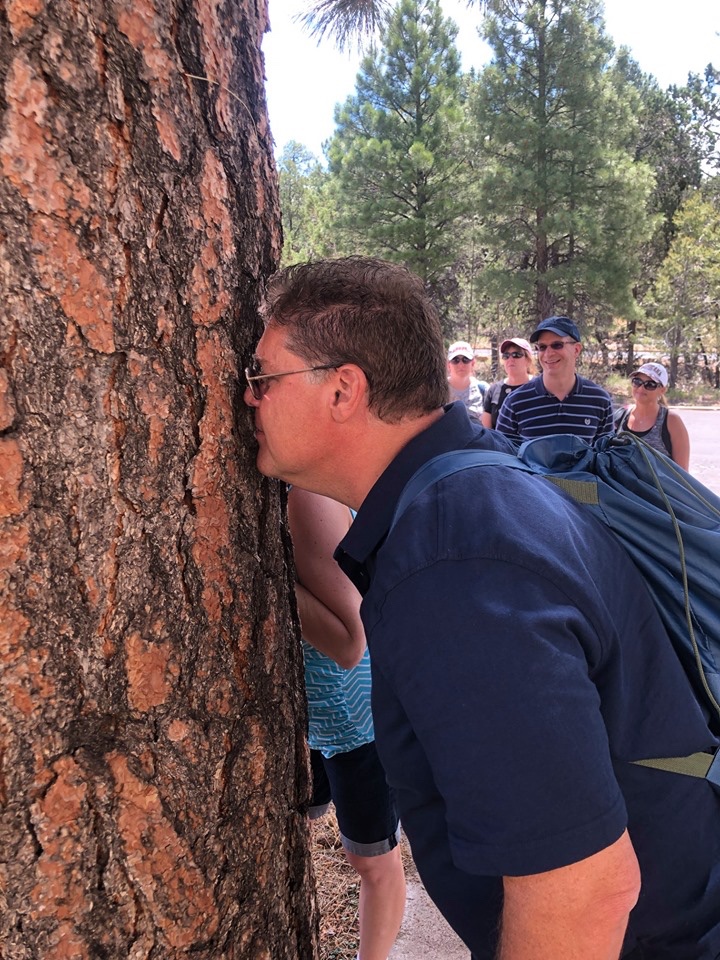 Who knew that if you smelled the crevices of the bark, that the tree gave off fragrances? Some smelled reminiscent of cinnamon, but most of the ones I smelled were fruity! This one smelled exactly like Wrigley’s Juicy Fruit Gum! 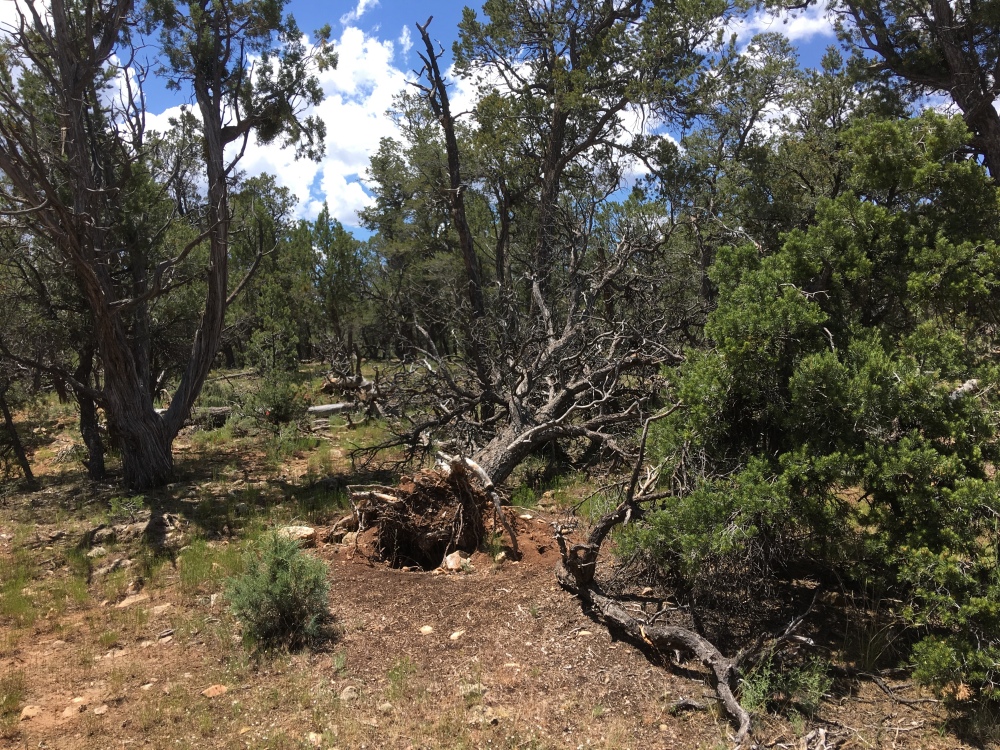 After our hike, we had the rest of the day free for ourselves to do whatever we liked! Lunch and dinner were on our own…and the guides had recommendations for us! Christine and I both wanted a salad, and Mark (the Sales manager with Disney) decided to join us for lunch. We ate at a place next to our hotel, right on the rim, and afterwards had ice cream. Delicious!

After lunch, we decided to do a bit of shopping in the Grand Canyon Village and then go back to the room for a bit of rest. 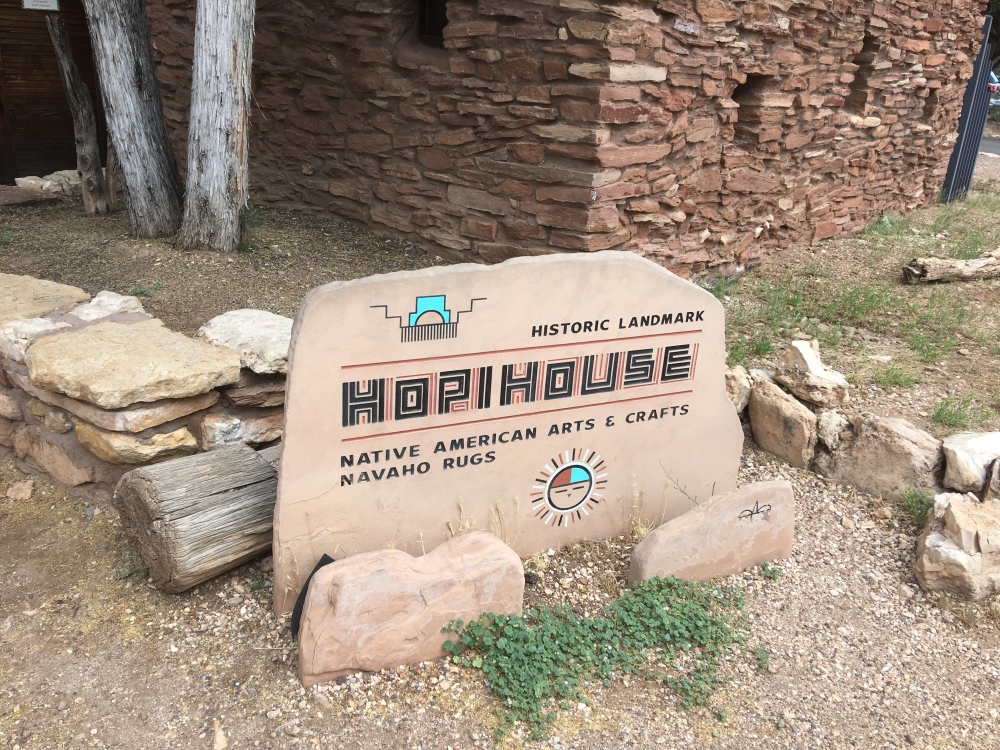 After a bit of much needed rest, we decided that we would give the National Park’s bus system a try, and go out to the Visitor’s Center to pick up a few souvenirs that we saw yesterday but didn’t purchase. It was a super easy system, and kind of reminded me of the transportation at Walt Disney World. After that excursion, it was about time for dinner!

Tonight’s dinner was going to be a bit different. Diana, our amazing ABD Guide, suggested that we go to the Grand Canyon Village grocery store (they have a deli in the front) pick up a few sandwiches and have a picnic dinner on the rim of the canyon at sunset. We decided to do just that!

We walked over to the store, which was about a mile or so away (we could have taken the bus, but we wanted some exercise) we got our dinner and then walked back to the rim and looked for a quiet place to have dinner. 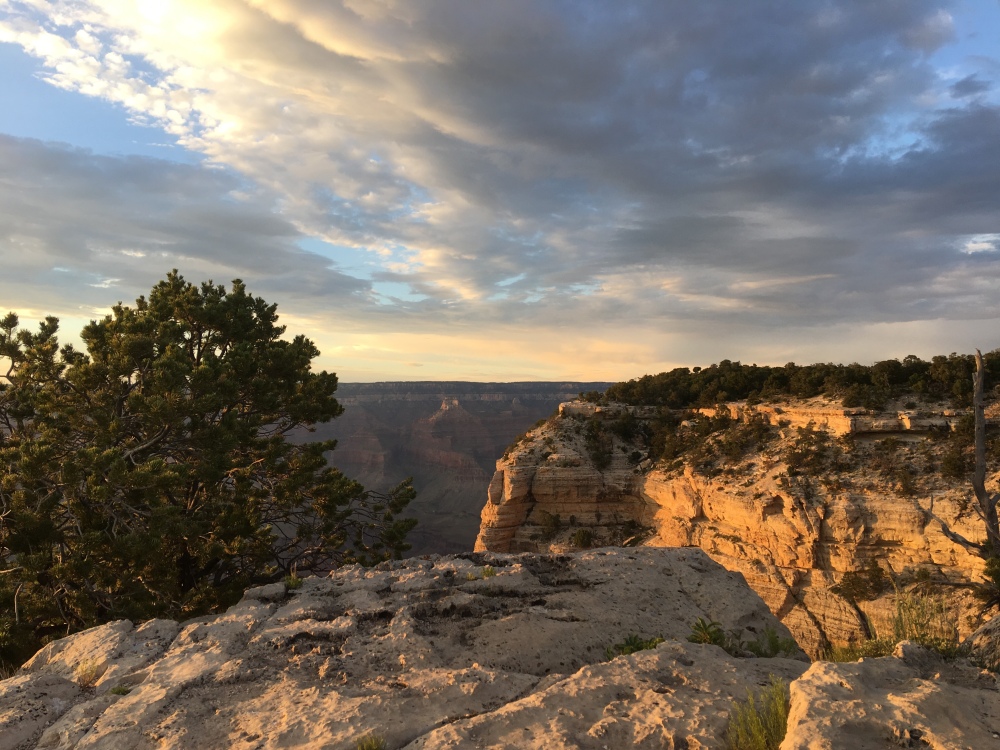 What we found was truly a spectacular spot. There was no one else around, and the scenery was truly amazing. It was so quiet and peaceful. Unfortunately the cameras could not capture the beauty we saw. 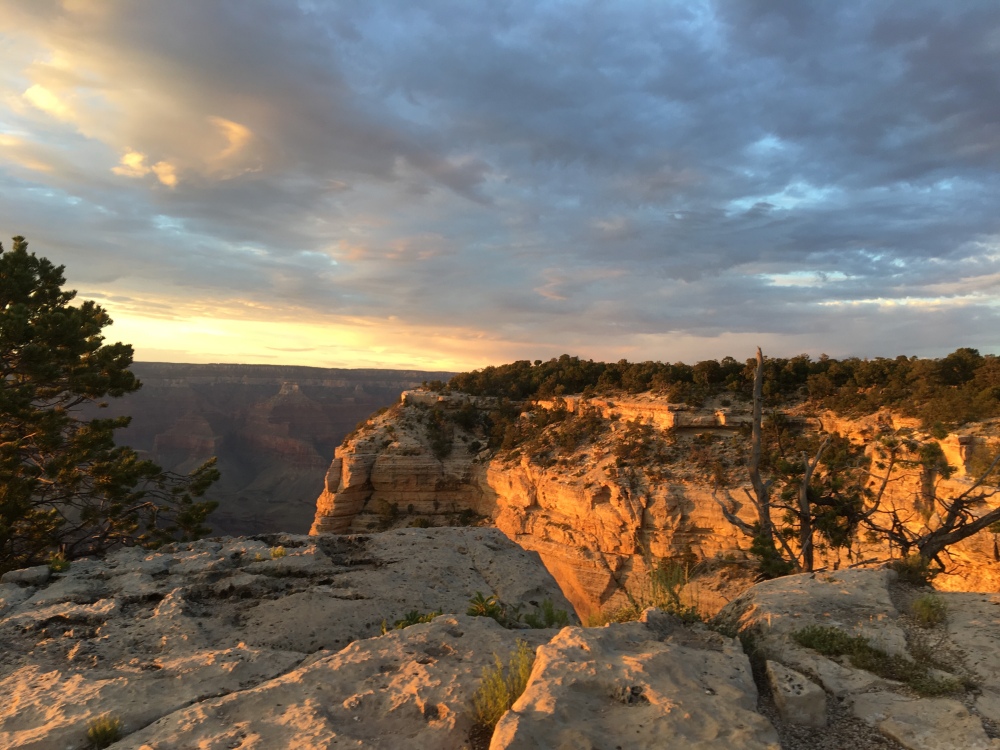 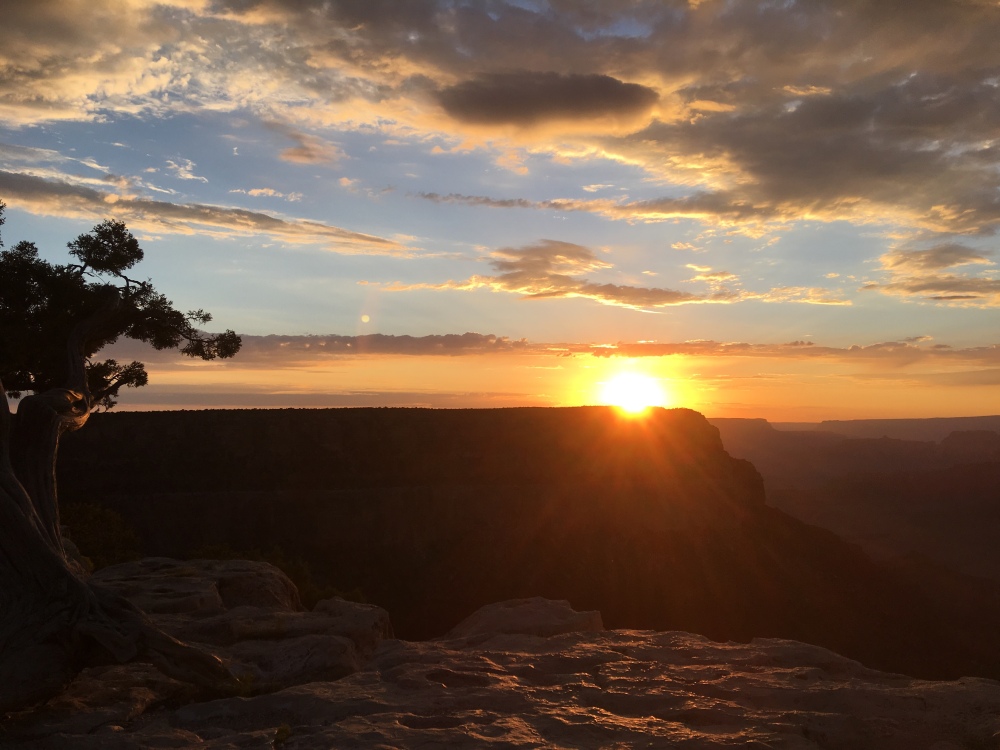 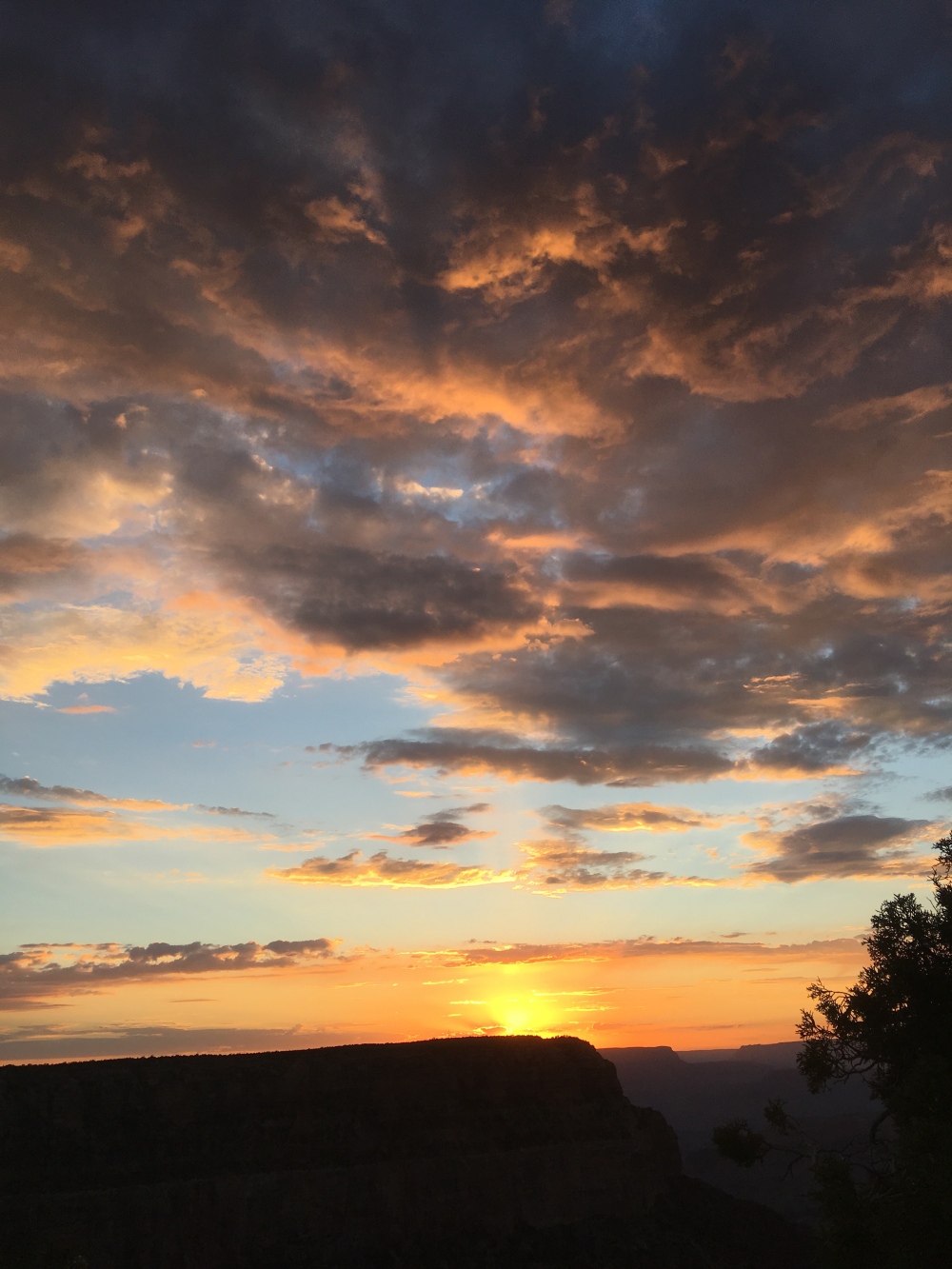 After sunset, we walked back to our hotel on the paved path, and fell into our beds exhausted but happy! What would tomorrow bring?!? 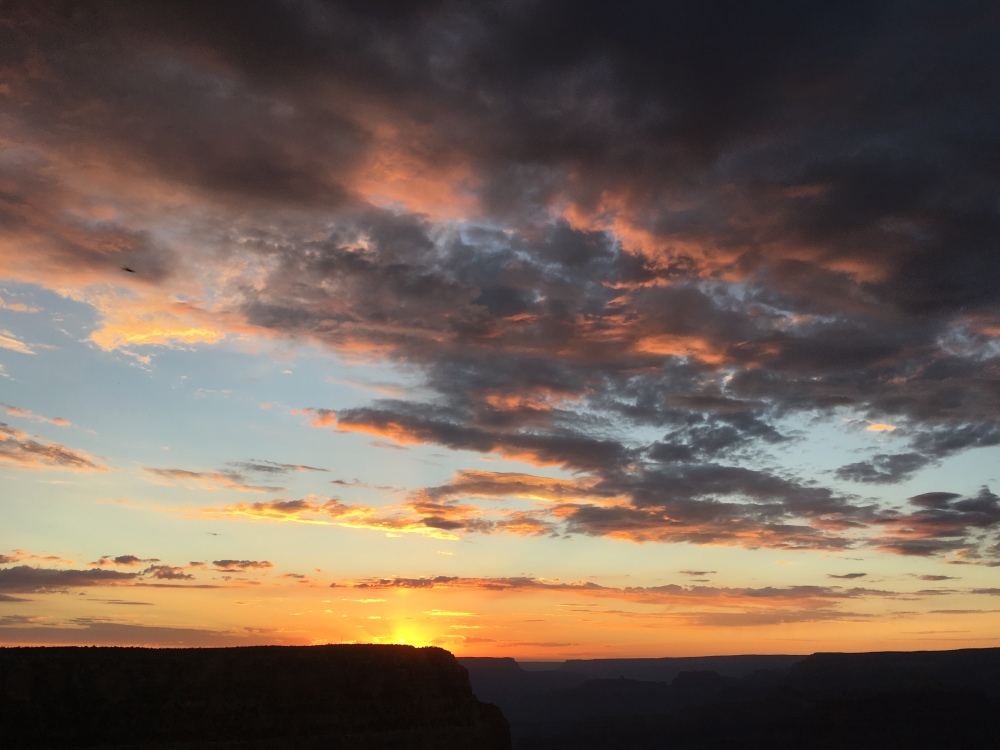 Hi! My name is Kenneth Reece, a native from Stockbridge, Georgia. I opened Enchanted Gardens Florist & Gifts in 1986--when I was just 19. My love affair with Disney started in 1998 when I added Walt Disney collectibles to my merchandise displays. When I started to learn about the rich history of The Walt Disney Company, (which is required to successfully sell Walt Disney Animation Art) is when my store came alive. I've enjoyed hosting Disney Artists, Sculptors & Imagineers for in-store signing events, and was thrilled to tour the Walt Disney Studios in Burbank a few times as a guest of the company. One of my fondest Disney memories is that of holding one of Walt Disney's personal Academy Awards while visiting the Walt Disney Archives in Burbank, CA. As my love of Disney grew, I began planning trips to Disney for my clients at my store, which grew into a new career! After a few years of both running my retail store and planning travel, I closed my brick & mortar store, moved to Vero Beach, Fl where I've been planning travel full-time now for over five years. Vero Beach has small-town charm with world-class luxury. It's an incredible place to live. I help take care of my parents here, and travel extensively with them. Together, we visit Disneyland and The Walt Disney World Resort often. I've planned tours in England, Scotland, Paris, Greece, Italy, Denmark, Ireland, & France including Disneyland Paris. Living in Vero Beach, where retirees seem to outnumber all other age groups, I've become an expert on helping people travel who are "young at heart". Living a short road trip away from the Orlando area, I visit the theme parks at Walt Disney World, Universal Orlando & Sea World often. Many times I'm there once a week! I've stayed at every Disney Resort in North America, toured every hotel at the Universal Resort, and have taken over 25 cruises, being a Platinum Castaway Cay member with Disney Cruise Line. I've cruised to the Caribbean, The Bahamas, Alaska, the Panama Canal, Trans-Atlantic (East & Westbound), Mediterranean & Northern Europe. Also, if you need restaurant recommendations, I've personally ate at most of the restaurants at the Walt Disney World Resort & at the Disneyland Resort in Southern California. Disney's Animal Kingdom Lodge is my favorite Walt Disney World Resort, and Disney's Grand Californian Resort & Spa is my favorite resort at Disneyland. I've attended various events at Walt Disney World such as: Mickey's Not So Scary Halloween Party, Mickey's Very Merry Christmas Party, Star Wars Weekends, Disneyana Conventions, EPCOT's Food & Wine Festival, The Flower & Garden Festival and the new Festival of Arts. Contact me for personalized, concierge-level service. I'll help you as much (or as little) as you like, whatever your needs. I want to provide you with a worry free, incredible vacation, with memories that will last a life time. View all posts by Kenneth Reece