On November 27, we arrived at our next port, Puntarenas, Costa Rica. I’ve wanted to visit Costa Rica for a very long time, and my initial reaction was disappointment. After a very smooth and organized departure from the ship, we boarded motor coaches to our destination–the Scarlet Macaw Sanctuary. The buses were waiting for us right on the pier as we walked down the gangway. There was a photo opportunity with a Costa Rican wearing her traditional dress. One of the ship’s photographers took the picture and I was off to get on the bus. After the bus filled, our guide, Aaron greeted us and we were off. After driving down the pier, the port city of Puntarenas was disappointing at best, and maybe a bit scary at worst. Aaron said that Puntarenas was not a typical tourist town (no doubt!) and that no one really visited the city. He said that when ships dock, all the tourists get on buses and leave the town. Our first stop was to a marina about 20 minutes away where we were to board a boat to experience the mangrove forest and hopefully to see some wildlife. This excursion was crafted by Animal Planet specifically for Princess Cruises (more on the Discovery Channel/Animal Planet offerings in another blog entry). One of the things that I’ve noticed on this cruise is that for the most part, all of the tour guides and the Princess Crew leading the shore excursions are very mindful that no one is left behind (I saw every guide on every excursion counting guests). I also like the idea that they were very patient for all of the guests who walk slower than the rest. We’ve stopped and waited for every person to get caught up so that they don’t miss anything.

I got a seat in the back by the side of the boat, and once we left the dock, we were off. It was a slow moving boat, and a beautiful warm day. Aaron said that Puntarenas was the hottest spot in all of Costa Rica, averaging about 95 degrees Fahrenheit at the pier. This felt like a very real version of Disney’s Jungle Cruise! In the mangroves, we saw two different kinds of iguana, and this is when Aaron told us that chicken tastes like iguanas. He said that when chickens were introduced to the country, the native people said that the meat tastes exactly like iguanas. I think I’ll stick with chicken! 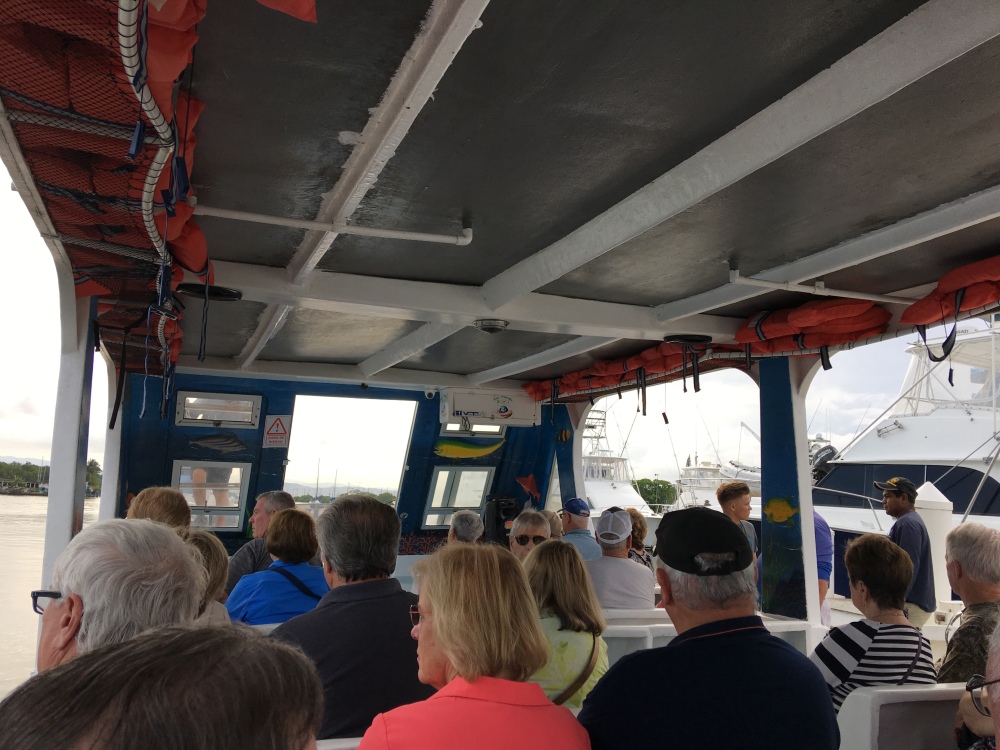 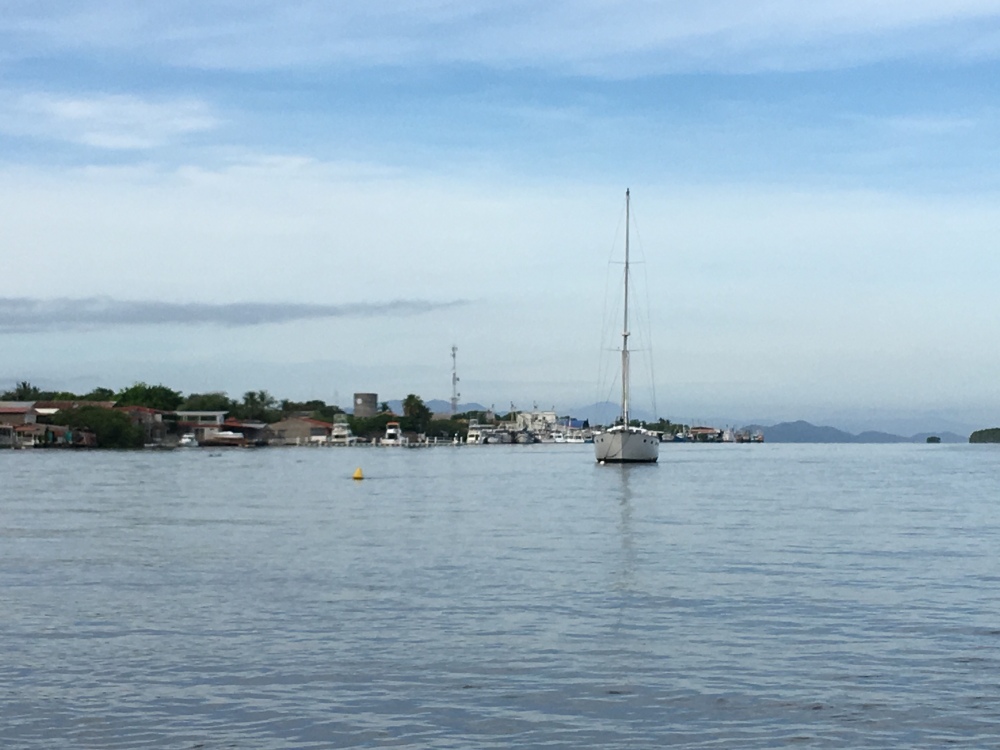 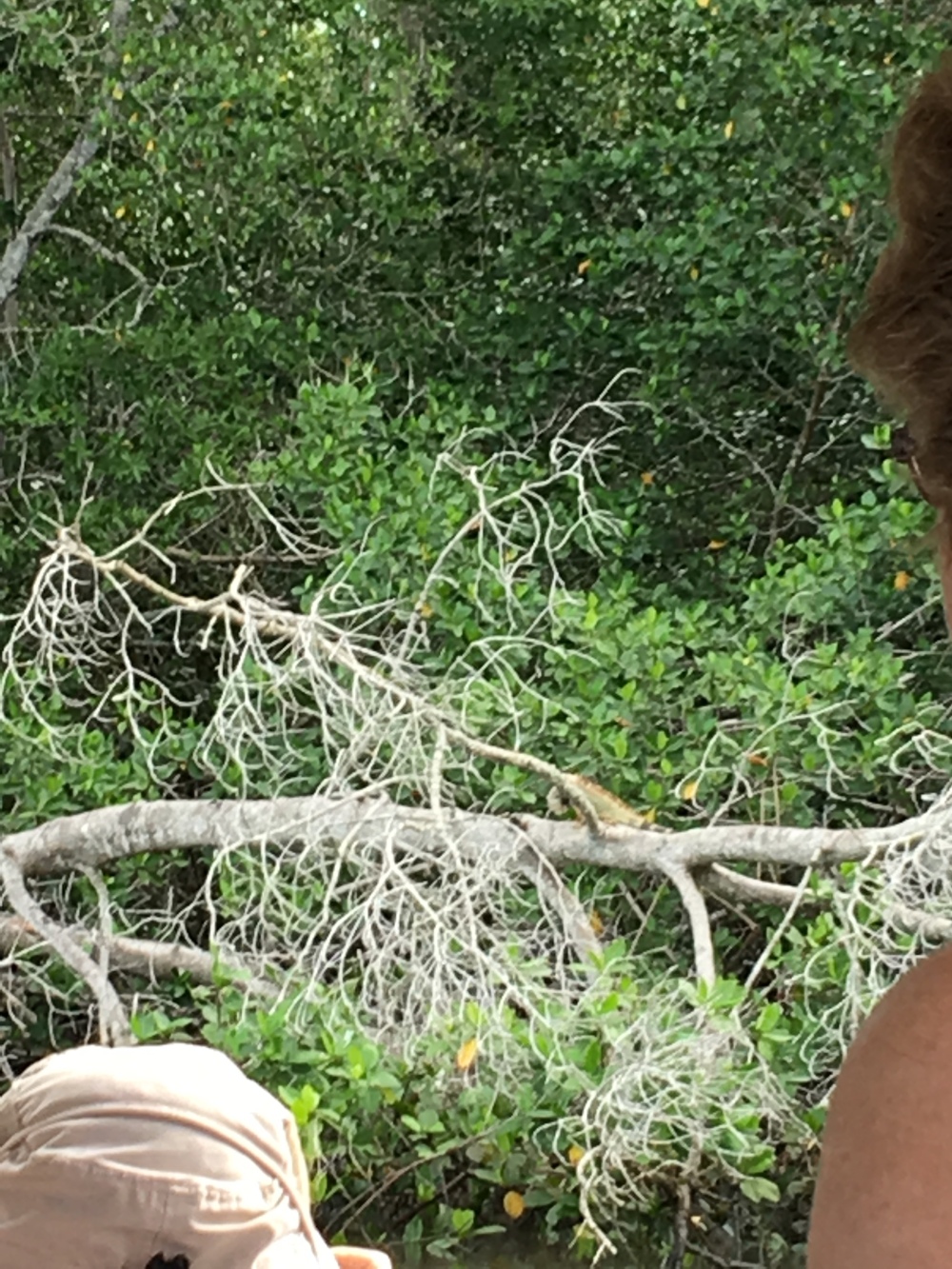 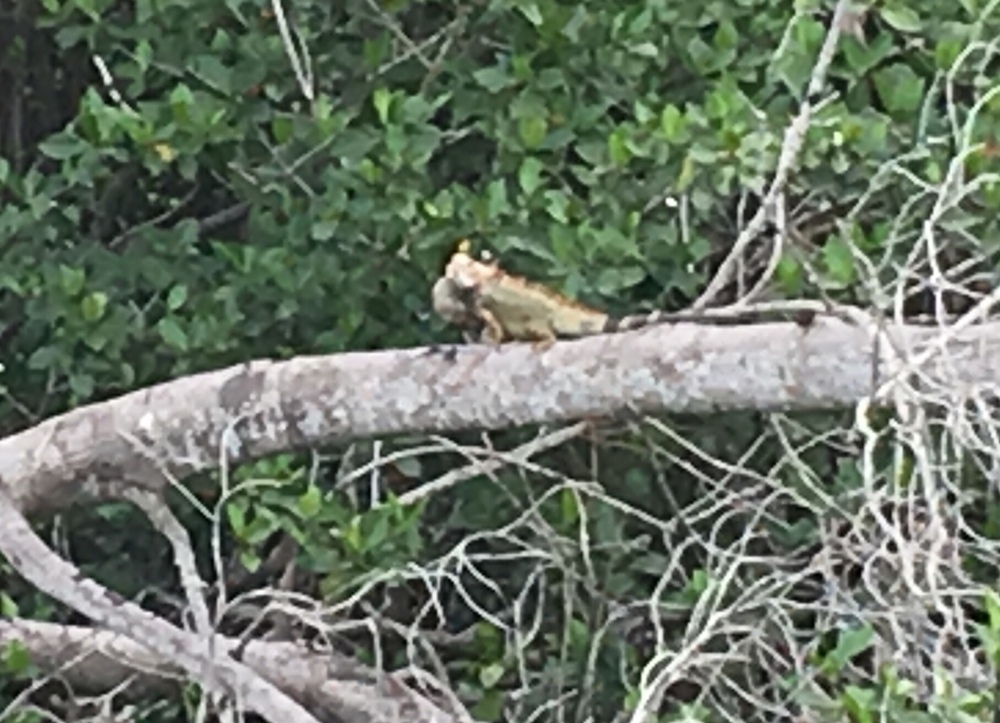 During our cruise, we saw a crocodile sunning itself on the bank! I thought this was very cool, as this was the first time I saw a crocodile in the wild. As we got a bit closer, he slid into the water, swam at the surface for a bit and then completely disappeared into the murky water. 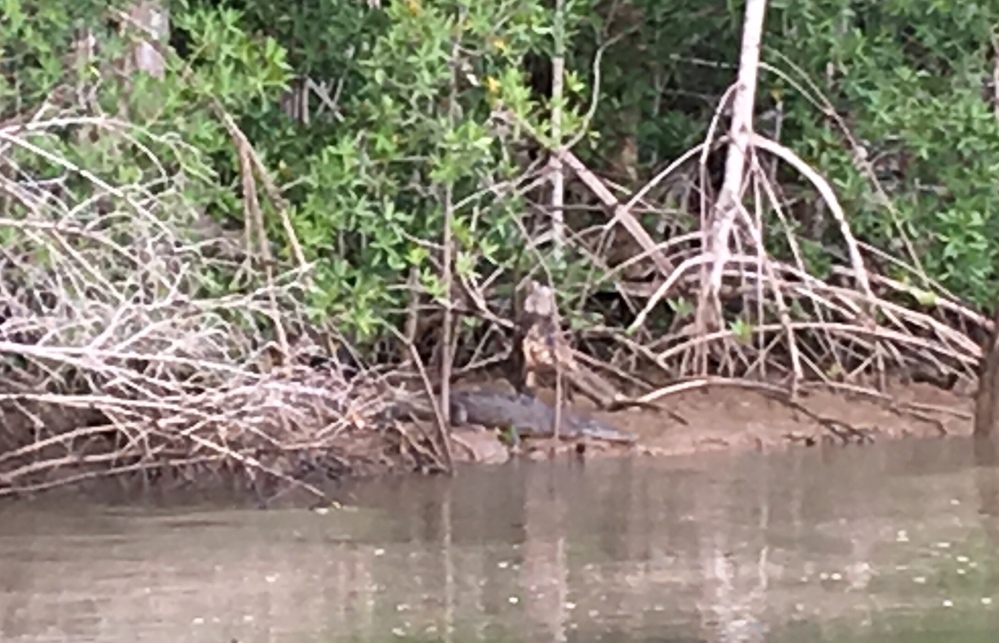 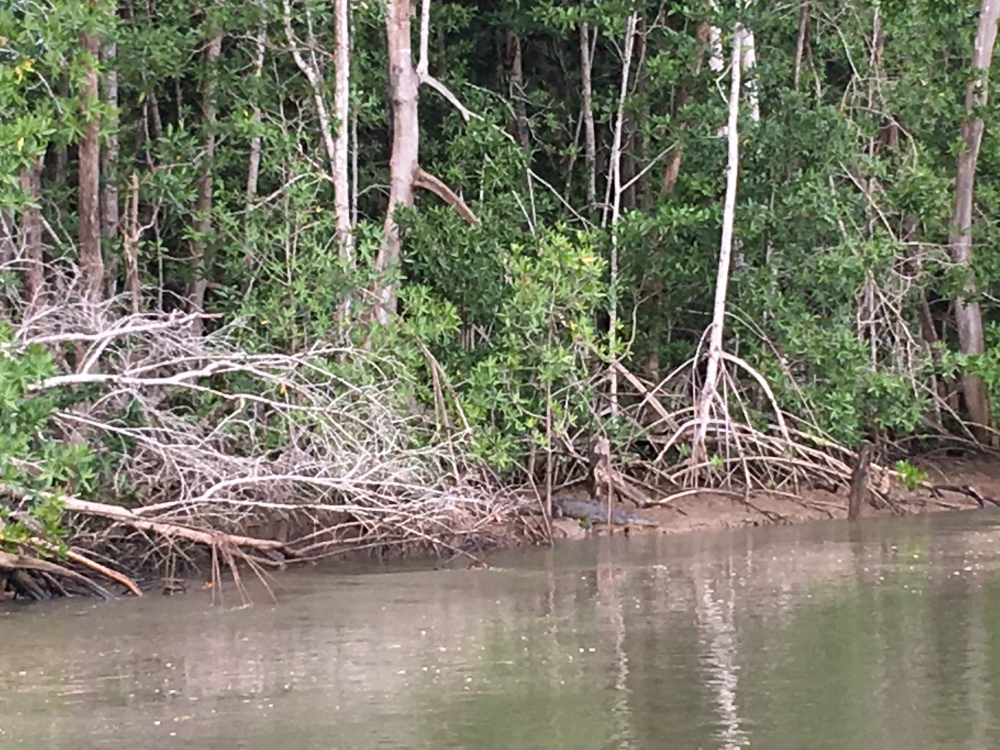 We also saw a lot of water birds, but really didn’t see any species that doesn’t live in Vero Beach. It was very cool, though to see them in a more native habitat instead of the front yard! Before I knew it, our hour long “Jungle Cruise” had come to it’s end, and we were off to the Scarlet Macaw Sanctuary–which was the main destination of our excursion.

As we left the city of Puntarenas behind, Costa Rica transitioned into the country that I had imagined. The countryside was absolutely beautiful, and lived up to my expectations. I really feel bad for the guests on the ship that didn’t venture farther than the port in this beautiful country. I really wished that the bus had done a couple of photo stops…it’s very difficult to take good pictures from the inside of a moving bus. 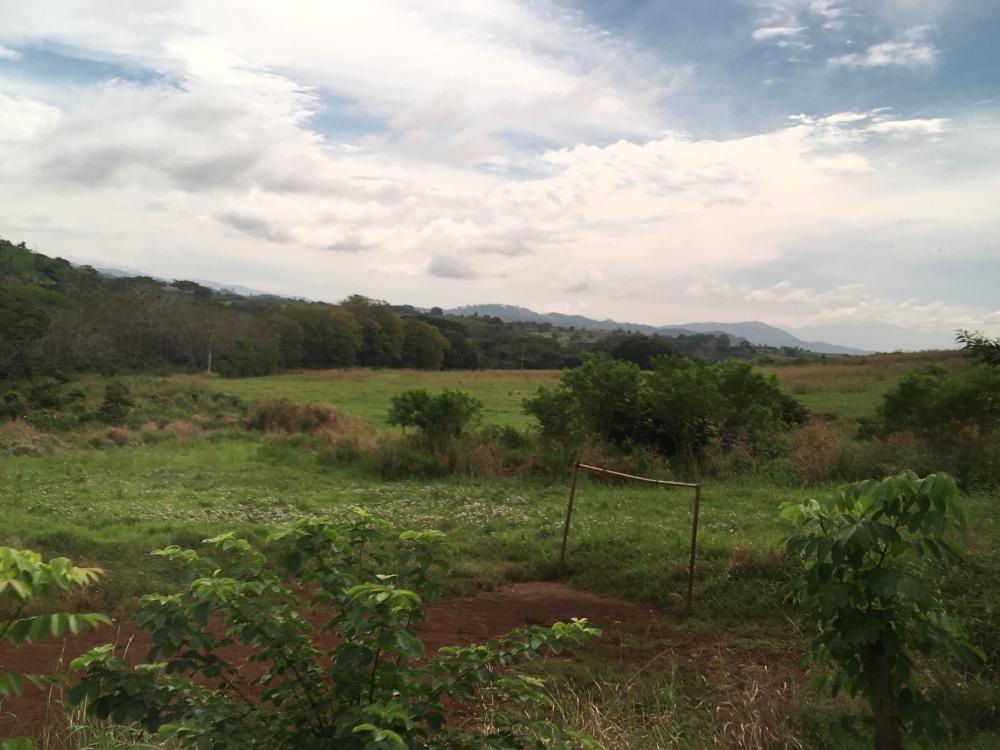 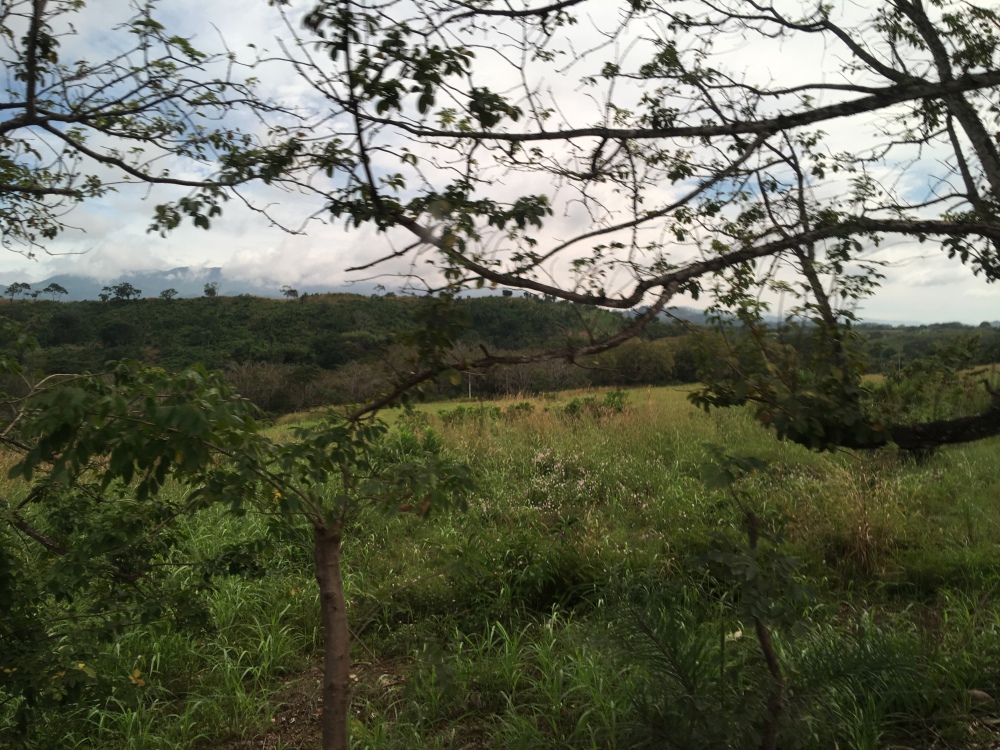 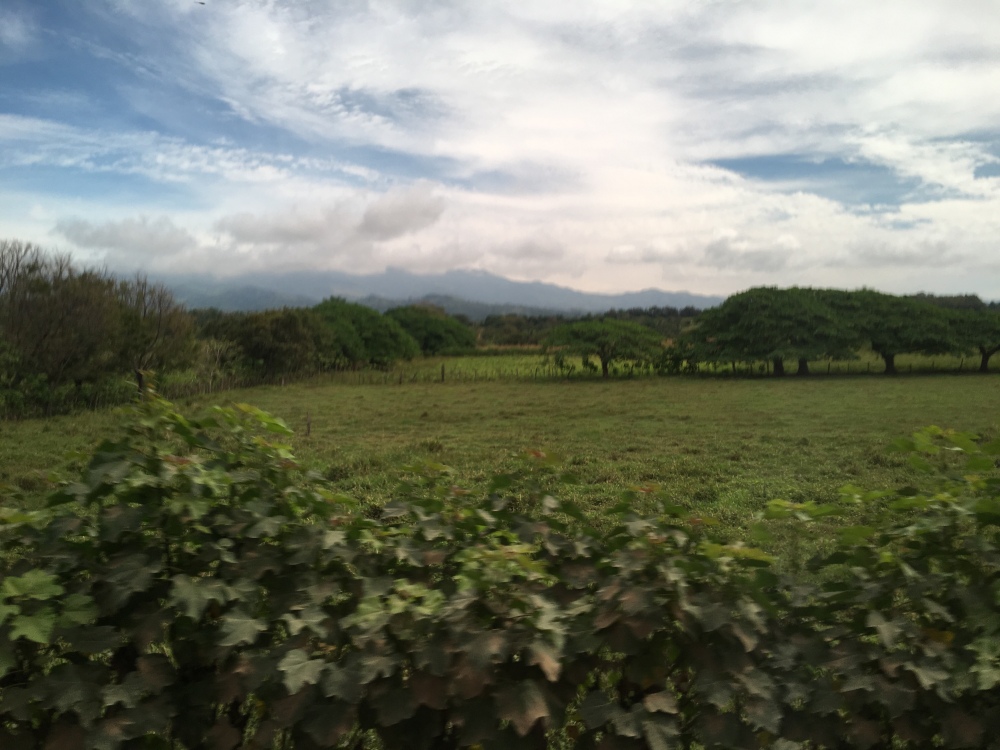 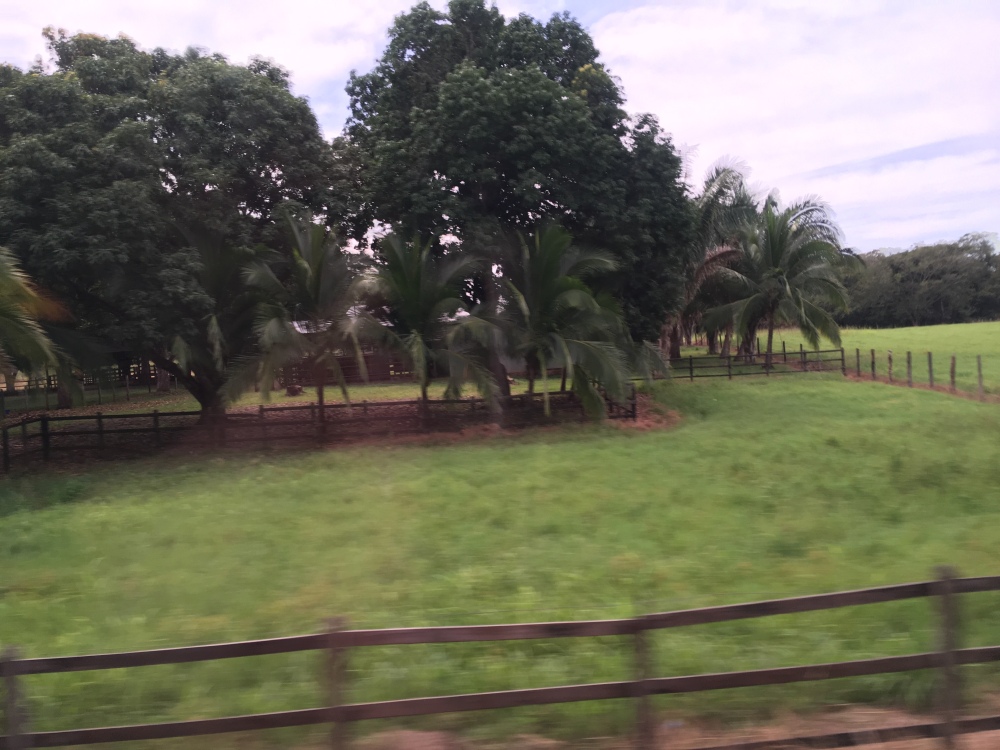 After about a 45 minute ride, we arrived at the Scarlet Macaw Sanctuary. This place was formed to rehabilitate Scarlet Macaws and other native bird species of Costa Rica and return these animals to the wild. They began as a sanctuary for birds, but has morphed into more of a center that takes care of a lot of species. The Costa Rican government sends confiscated animals (mainly from people who are trying to smuggle animals in or out of the country) to the sanctuary, and since there is no where else for the animals to go, they wind up here. If the species they receive are native, they go into rehab, where they are taught (in a hands-off approach) to learn how to live in the wild. The main objectives for their release back into the wild is when they learn how to fly long distances (their enclosures are very large and doughnut shaped, so they can fly in a continuous circle), learn how to eat (cracking an almond to get to the nut is a hard task) and they also have to learn how to “flirt”. Once they’ve achieved these objectives, they are released. The center keeps food and nesting facilities for the birds on the grounds for the released birds. They said that they tend to hang around for a while, flying away and returning, before they eventually move on. 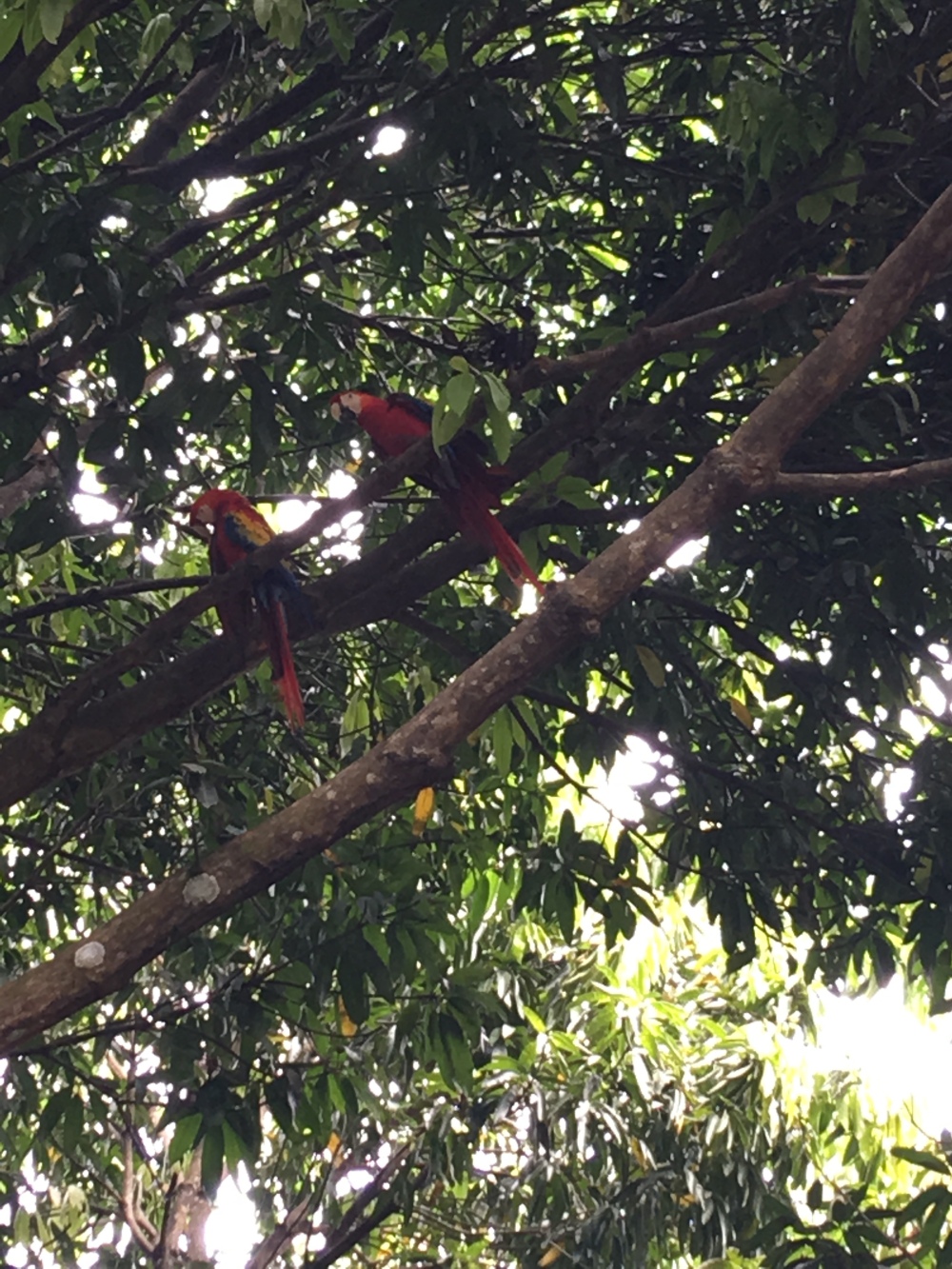 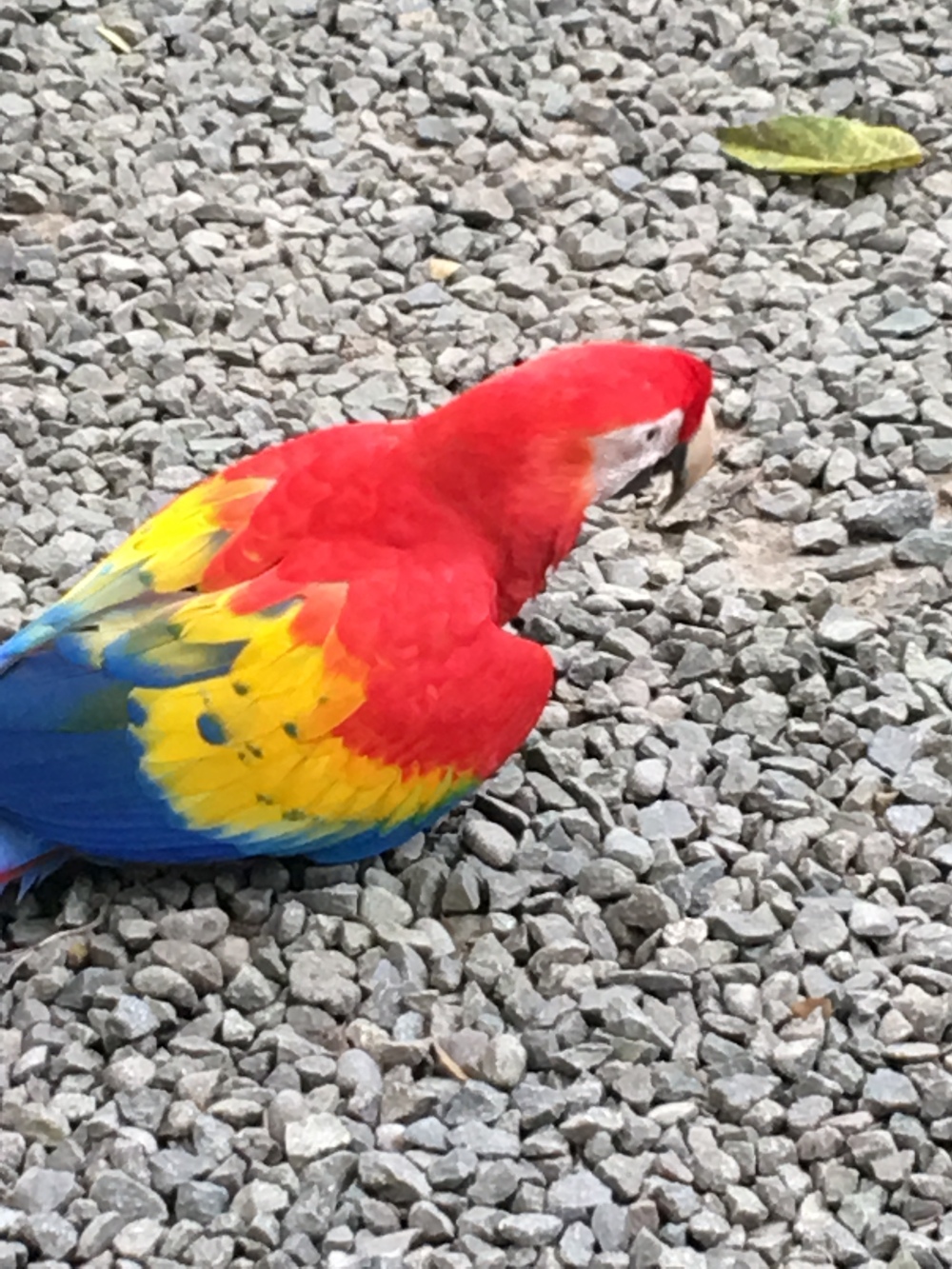 Sometimes, the Costa Rican government sends non-native species to this facility (again, mainly confiscated from smugglers). When they receive these, they are kept in cages, much like a zoo. They are cared for, but they will not release any species that isn’t native, for fear of devastating one of the native species.

We saw tapirs, ocelots, monkeys, parrots, parakeets, cockatiels, toucans, and honestly, I can’t remember which others were there! Every time we turned a corner, while walking through the sanctuary, there was another enclosure. I think besides the macaws, the monkeys were my favorite! 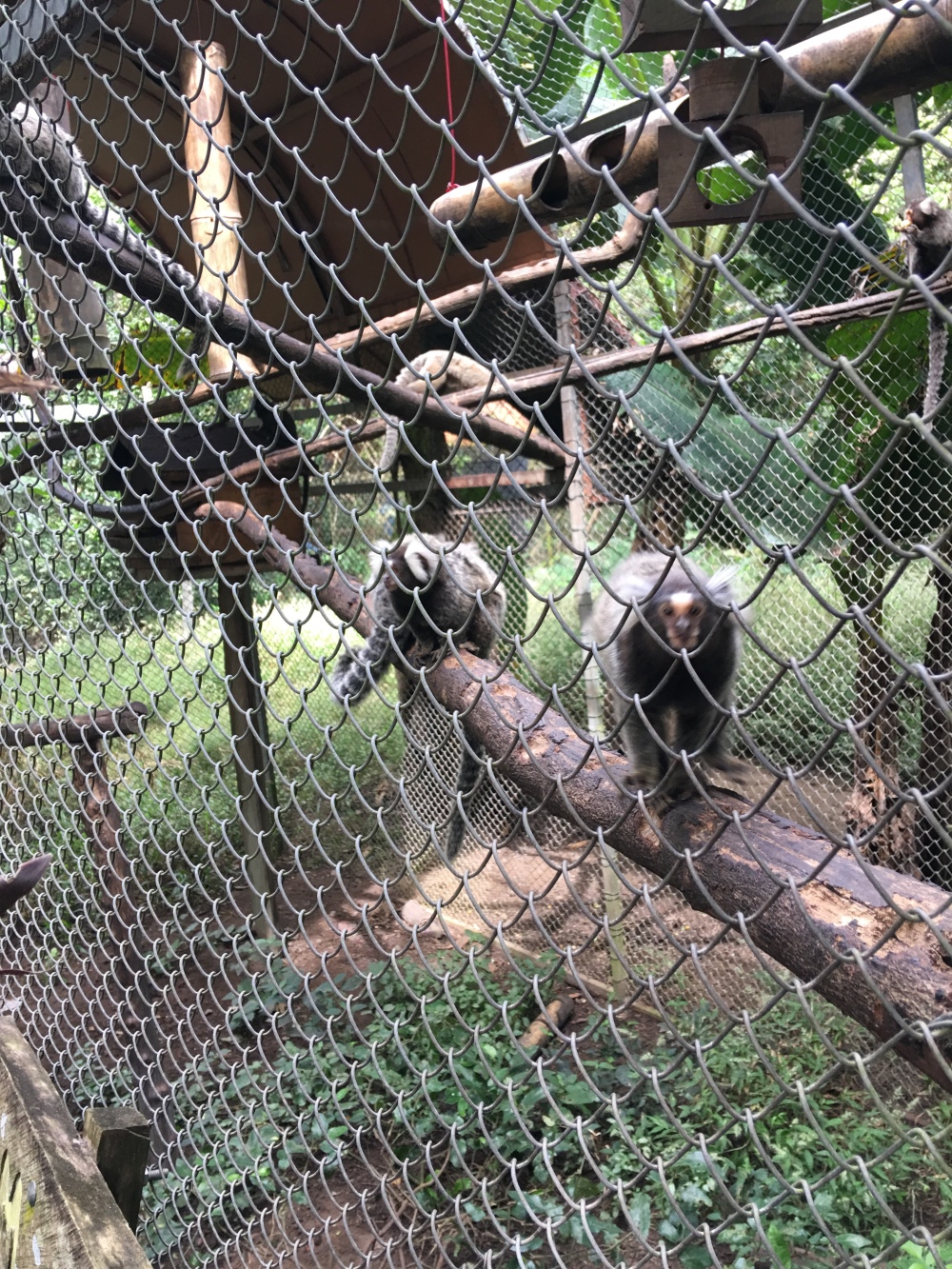 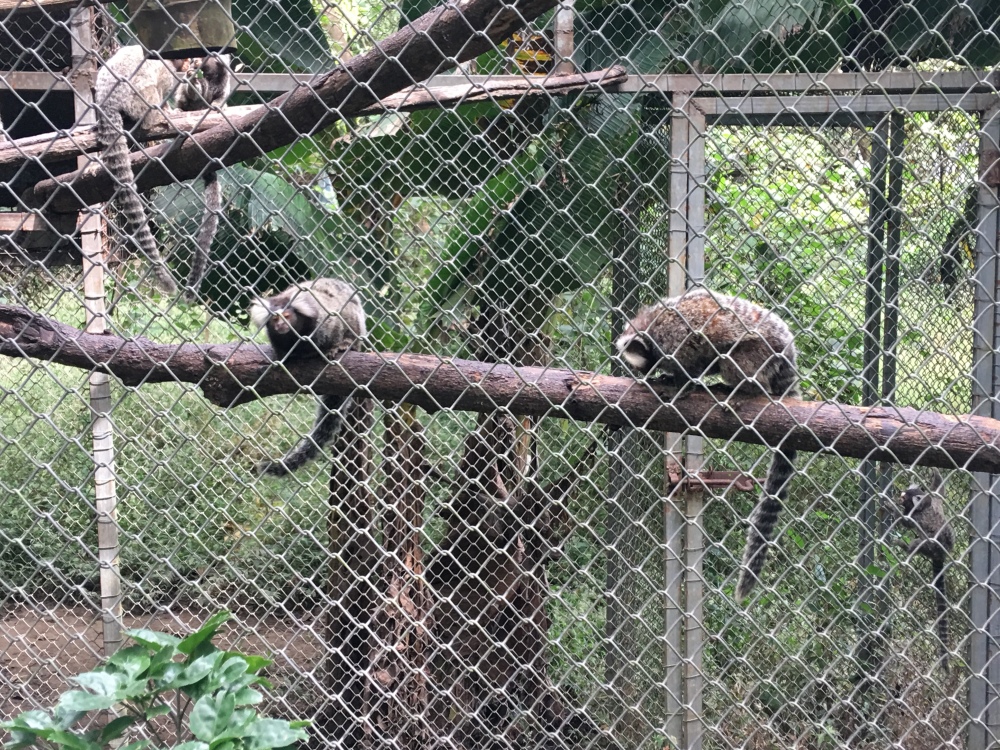 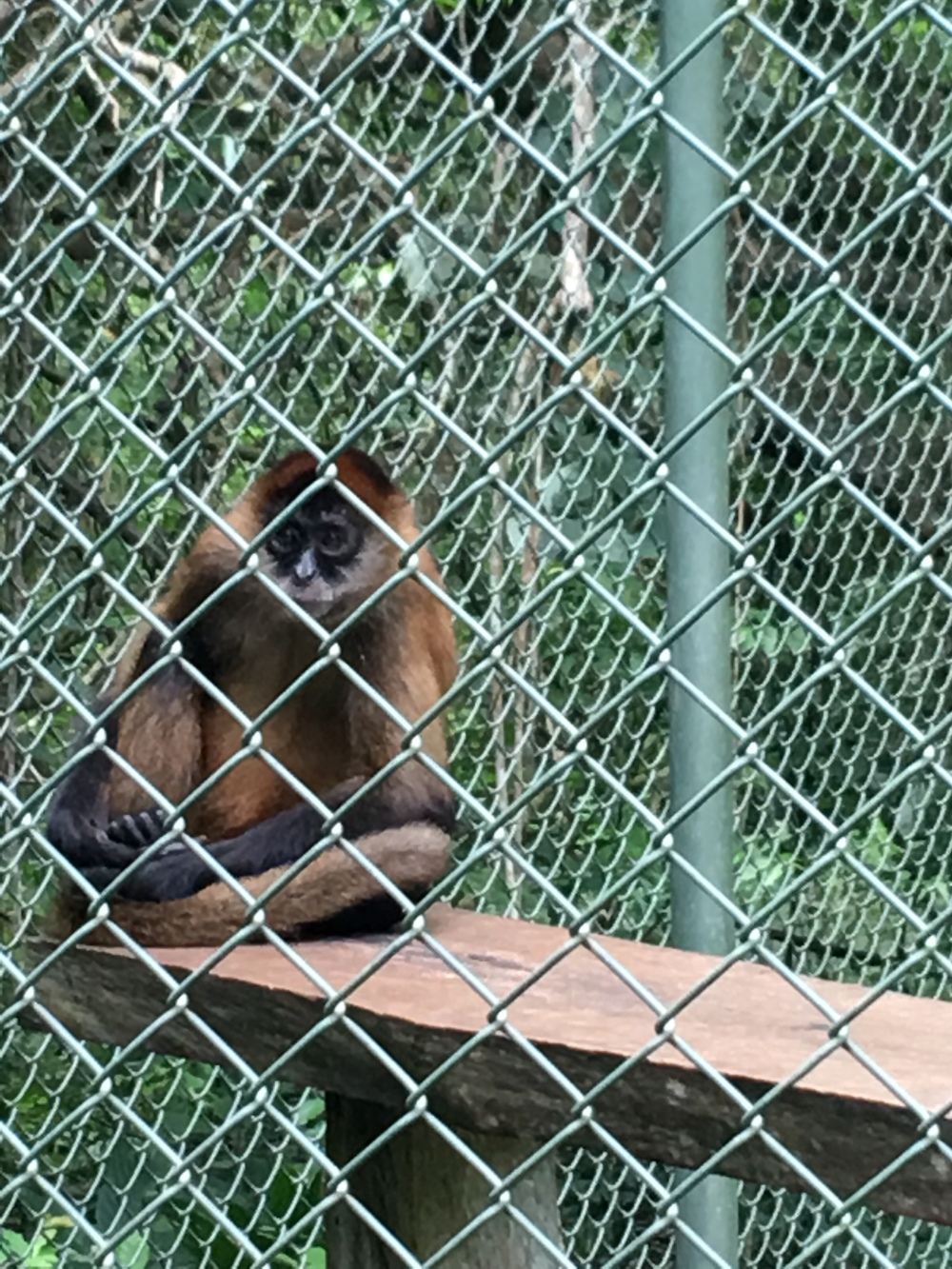 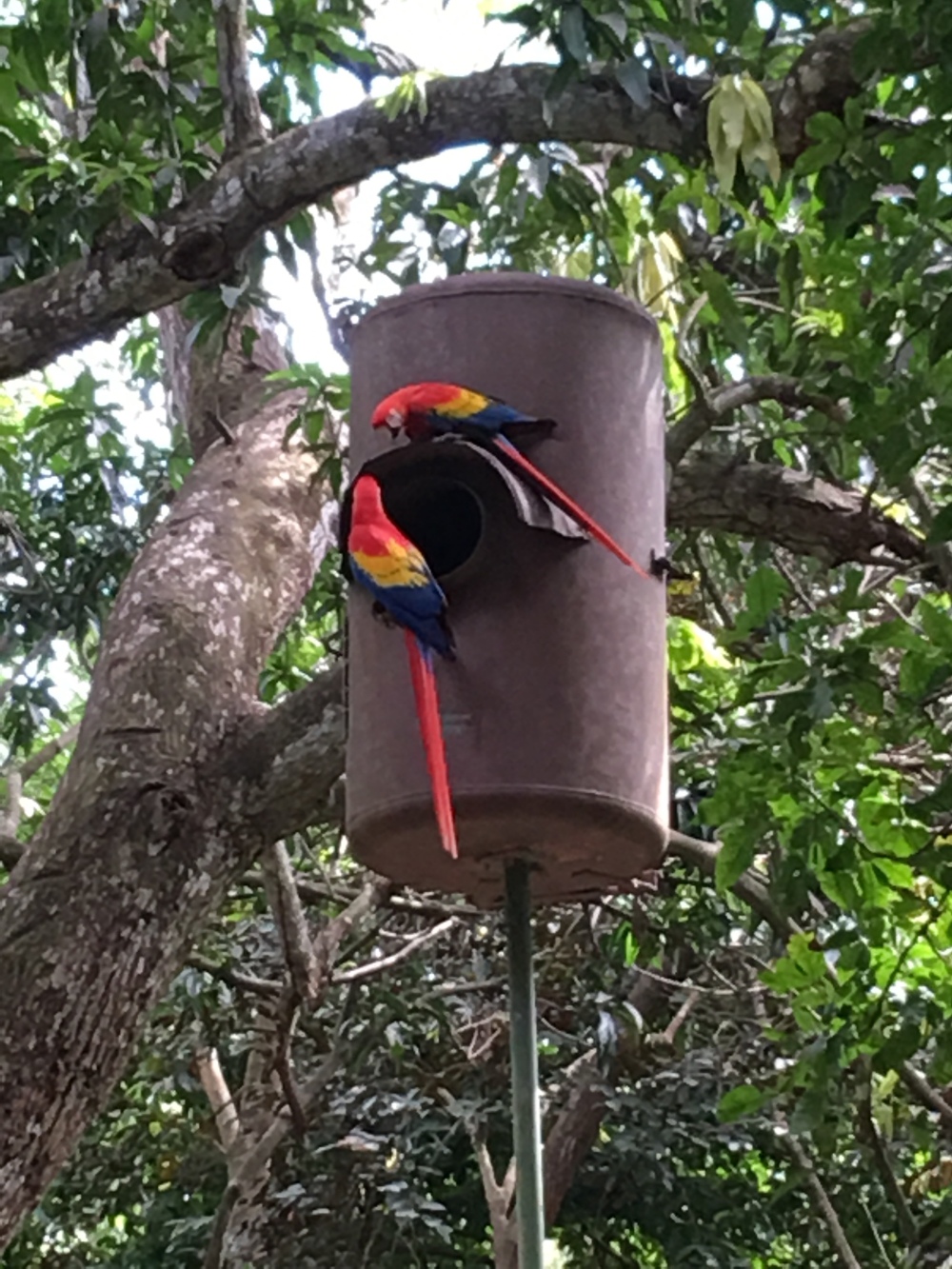 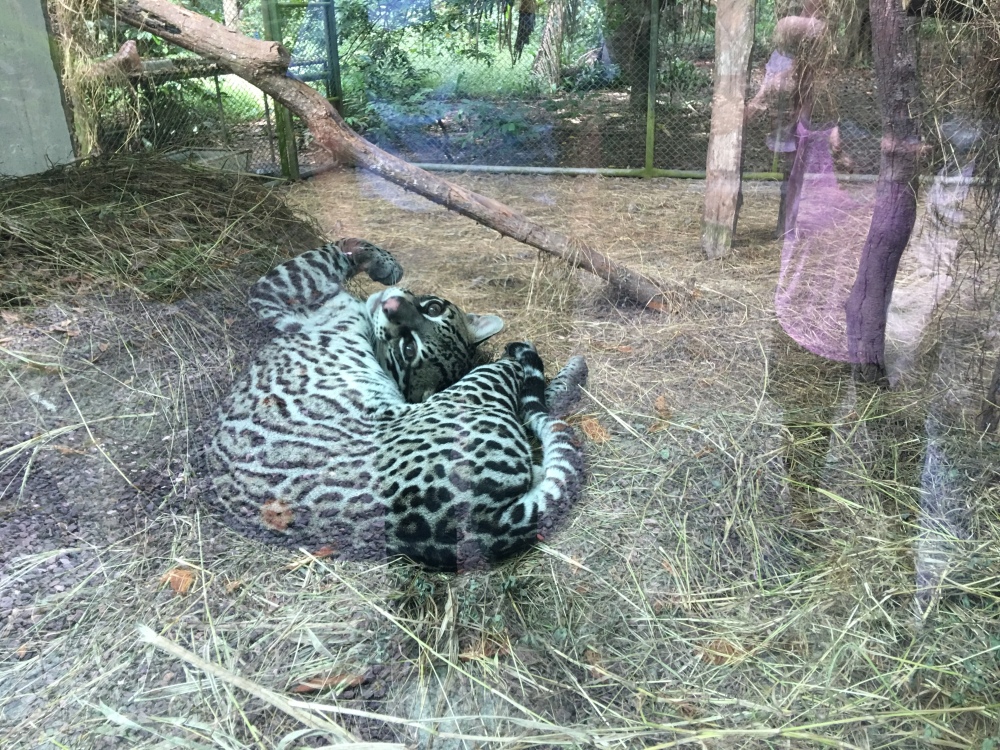 About halfway through, we stopped for a fruit snack. They had pineapple, papaya & bananas. The pineapple was really good, I tasted the papaya and realized I don’t like that fruit at all! The banana was simply amazing. It was truly the best one I had ever had…I guess I’ve never had a freshly picked banana before–it looked like a grocery-store banana, with the exception that it wasn’t “pretty”. It wasn’t solidly yellow, it had marks on it–if it had been at Winn Dixie, I would have passed it up. It tasted more “banana” than I have eaten before. I wish I had gotten a second one! Our guide said that Chiquita started not too far from here. If you ever get the chance for a freshly-picked banana, don’t turn it down! 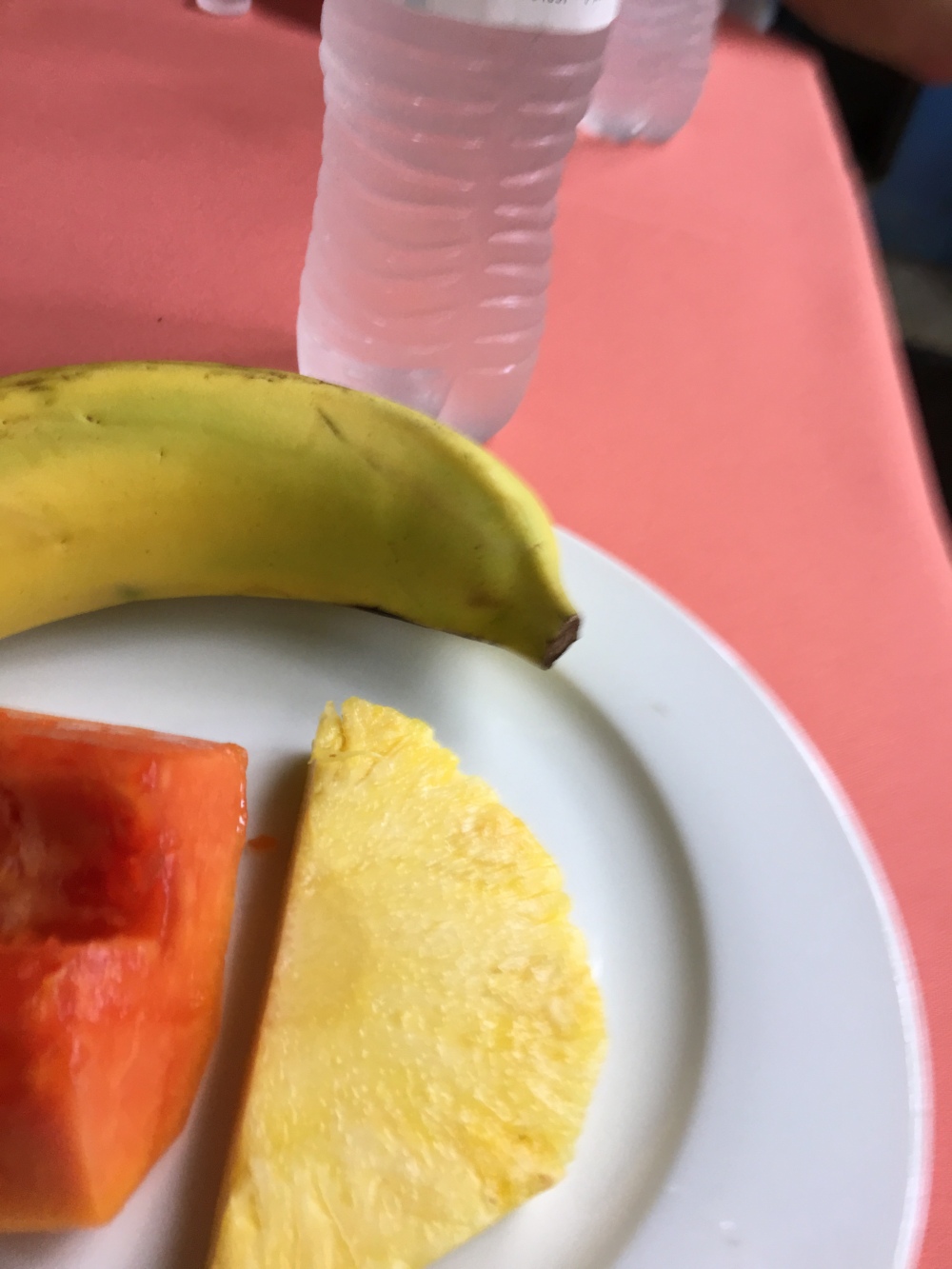 After our snack and a quick rest, we finished touring the facility. I took lots of pictures (they will be in an album on Facebook once I return home). I was also amazed at the plants that had been planted at the sanctuary. I asked, and they were all native to Costa Rica…I think I saw almost every plant that I used to sell at my flower shop. I saw: bromeliads, peace lilies, sanseveria, dieffenbachia, schefflera, agloenemia, staghorn fern, palms, etc. So cool to see all of these plants just growing in the forest!

It was time to return to the port way before I was finished…I could have stayed here another few hours. After about an hour drive back to the ship, we had to say goodbye to Aaron. He was one of the best guides I’ve had on a cruise excursion…he knew so much about the animals, birds and his country and he was excited to share his knowledge. What a fantastic experience! 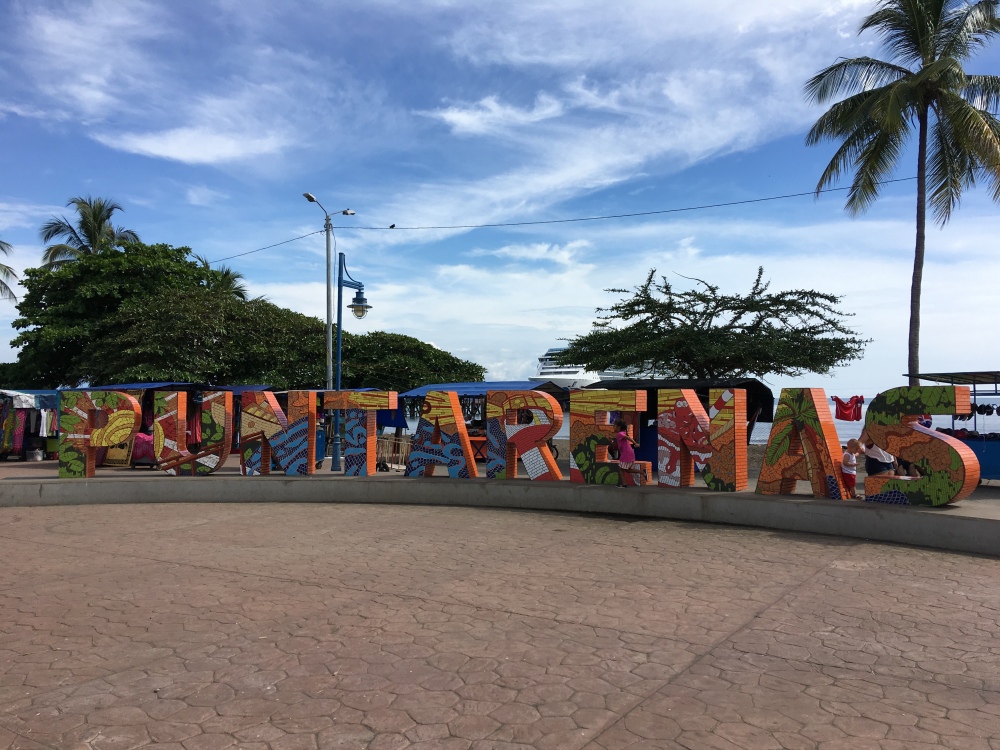 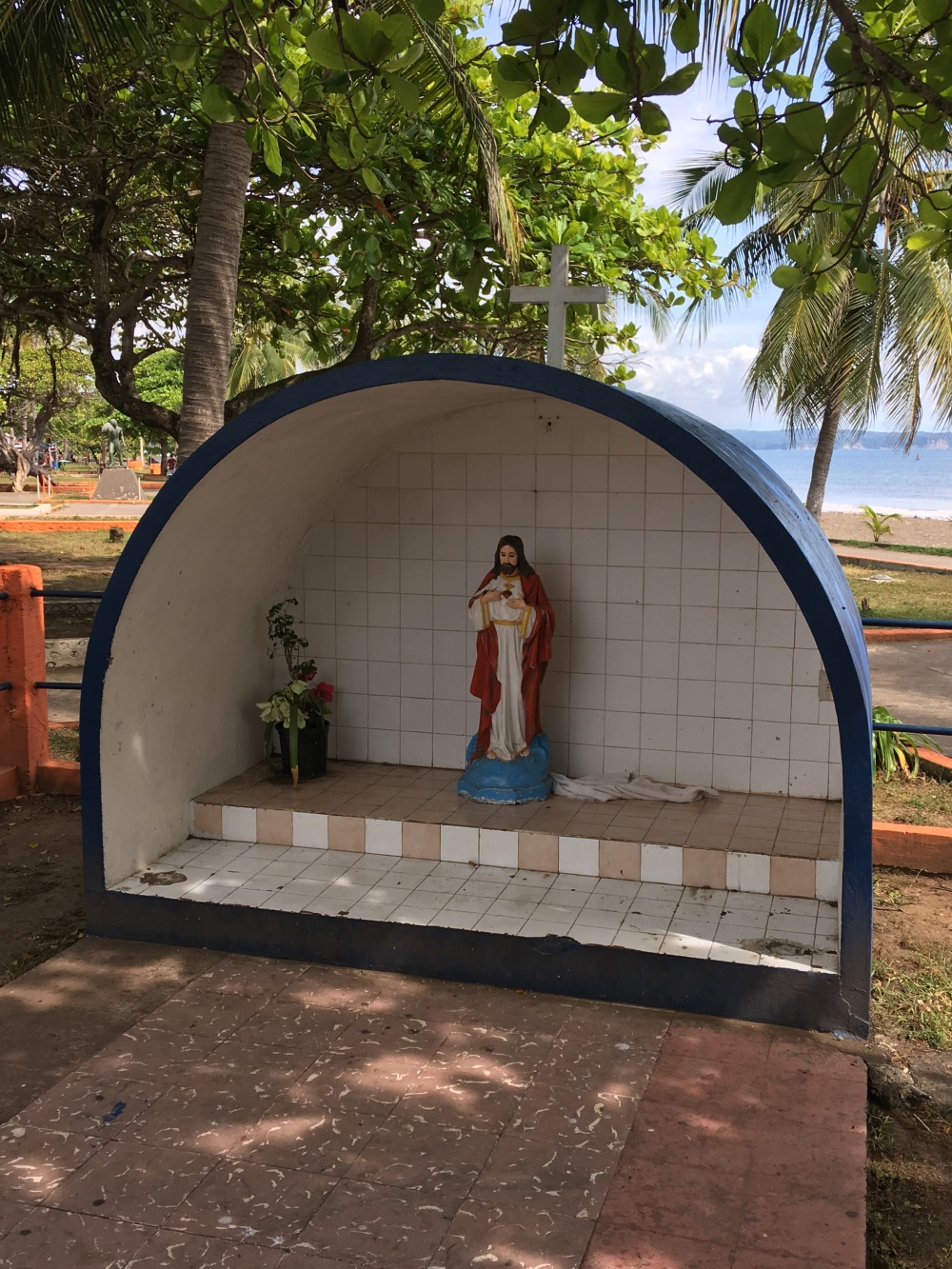 Again, Puntarenas is not a beautiful place. There were many outdoor stalls set up selling the typical port items–t-shirts, magnets, handcrafts, etc. I walked around for about thirty minutes before I headed back to the ship. Costa Rica lived up to my expectations. I had been excited to see the Scarlet Macaws here, and I got to see plenty! Also, seeing a crocodile and some wild monkeys just made the journey for me!

Our next stop is Nicaragua. What a surprise that country turned out to be!